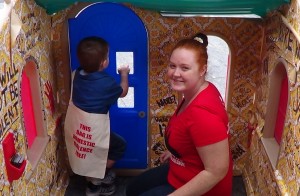 It was a part of domestic violence prevention month.

The Queen Street event, called “Out of the Shadows”, drew attention to the suffering of children and young adults as a result of abuse within families.

A variety of stalls provided fact sheets and information pamphlets and treats.

“It’s been done. If they see a girl with a bruised eye they turn away. They don’t want to know about it.

“That girl might need some help, but most people just turn a blind eye to it, in a way they don’t care,” she said.

Her group’s stall stood out with its creative and light-hearted approach through witty, colourful hand-made artworks.

“We didn’t want photos of girls beaten up and things like that. We wanted them to be quirky so that when you go home you’ll remember them.”

A colourful, petite playhouse drew attention as a centre piece.

“The kids’ playhouse is to show on the outside it looks all nice and beautiful, like a perfect home. When you actually go inside, there’s writing on the walls and it’s saying how domestic violence happens behind closed doors.

“You don’t always know that it’s happening until you get in there,” she said.

The event had activities for everyone, and showcased talent from young people.

With tearful eyes, one young woman read a poem she had written about children affected by domestic violence.

“Our children? They don’t need to hear of such things. We don’t like the reality that these topics bring.

“Let’s skip the trauma; tell fairy tales about how the world is a beautiful place to live in, and how things like this won’t happen to people like them.

“Let’s perpetrate the myth of our choice in assault, so when it happens to them they’ll think it’s their fault,” she read.

“Then they’ll be so ashamed they won’t speak out, and we’ll watch another generation of ignorance bout.”