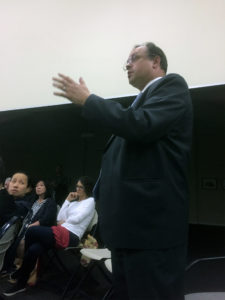 A Coogee doctor has blasted teleco TPG over its community consultation on small cell base stations in Sydney’s eastern suburbs.

“The way you have conducted yourselves so far has been absolutely appalling,” Dr Rahul Sen told a public meeting to loud applause from local residents.

Dr Sen said the jury was still out on the effects of long term exposure from the stations.

“If you look at the WHO (World Health Organisation) literature, they’re very clear that the long term data is not available for children and adolescents,” he said.

“I think it is wrong to say we have good and robust evidence, that it is safe for children and adolescents to be exposed to radio frequency long-term.”

About 40 people met at Randwick Community Centre to discuss their concerns with TPG representatives.

The October 15 meeting was set up for residents of Dundas St, Coogee, who had asked TPG to move the installation to alternative locations such as Neptune St or Blenheim Park.

Many other worried residents came to the meeting, including local councillors and people from Winburn Ave, Kingsford, who have raised the issue of small cell base station installations with Randwick City Council.

TPG spokesperson Jacqueline Crompton said there were problems with alternative sites suggested by Dundas St residents. These included TPG not being given access to the poles by electricity company Ausgrid, the structural stability of alternative poles or the lack of mobile coverage.

“Another suggestion was that we use the poles around the cemetery,” Ms Crompton said. “Ultimately it comes down to the right of the residents, who are also consumers of your technology, to have a say,” Cr Veitch said.

“I am putting it to you that you are erecting on the existing infrastructure because it precludes you from having to go through a DA process which would allow much more robust input from the local community and council.” Ms Crompton strongly disagreed.

The issue of greatest concern to residents was the possible danger of electromagnetic fields.

Independent consultant to TPG Dr Vitas Anderson debated with residents the studies on safe exposure levels both in Australia and overseas.

Dr Anderson, an engineer and biophysicist specialising in the research and management of human exposure to electromagnetic fields, told Newsbytes the expectation of ill-effects from base stations could potentially lead to people suffering from related symptoms.

“(There are) people who develop phobias. It’s almost in a way creating the disease,” Dr Anderson said.

“There’s a thing called the nocebo affect, it’s the opposite to a placebo (where) the expectation of something harmful actually induces real physical symptoms. So these people do actually suffer but it’s not related to the exposure, its an anxiety response.

“My number one message would be: trust the regulators and the scientific bodies that have been set-up to look at this, because they’re good. They do a very thorough review of the literature, it’s very considered.”