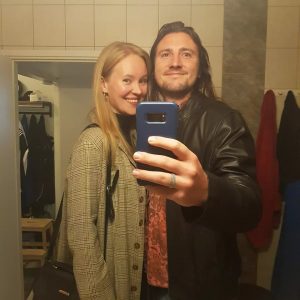 Australia’s population growth has slowed to close to zero in the year following the international border closure in March 2020, with more Australians leaving the country than have been able to return.

Overseas arrivals decreased by 81.4 percent in the year leading up to March 2021, compared to a 44.5 percent decrease in departures, ABS data shows.

Net overseas migration was negative for the first time since 1946.

Among the Australians who decided to leave the country despite the slim chances of returning soon was Kierin Clements, who left Australia to live in Finland in January 2021.

Clements and his Finnish partner, Johanna Mattila (pictured), had planned to long-distance date until they could start a life together in Australia, but that changed when the border closure made it impossible for the couple to visit each other.

When Clements was offered voluntary redundancy from his job as an events coordinator in Sydney, he decided to take a risk.

“Not being able to see my partner was quite difficult, so when I got made redundant from my job it was quite an easy decision. I actually made the decision within a minute of being told I got voluntary redundancy,” Clements said.

“Once I made the decision in my head it was really just seeing if everything would work out and if it was even possible for me to move to Finland, and after making all those decisions I just did it.”

For Clements, the redundancy turned into an opportunity to get to know his partner’s family and culture better, and to experience life in another country while he was still in his twenties.

As Australia’s borders begin to open up again to vaccinated citizens and permanent residents, industries including infrastructure, elderly care, health, hospitality and agriculture have warned of a skills shortage that may take years to undo.

A new report by Infrastructure Australia estimates the labour shortage will peak in 2023 as the government invests in public infrastructure to stimulate the economy.

Migration alone won’t be enough to meet the gap, and the report points to border closures, limitations of visa programs and poor utilisation of existing migrants as additional constraints.

While the borders are opening up, Clements is planning to stay in Finland for now

“I’m really enjoying it, so I’ll probably live here for another year or two, then potentially move back to Australia, but options are open.”