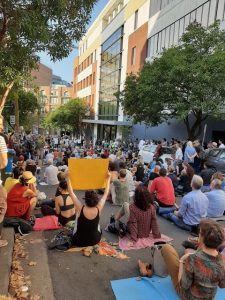 The ‘Lie-In’ protest saw those gathered sit and lie down in front of the Surry Hill’s headquarters of News Corp, home of the Daily Telegraph and The Australian among other News Corp newspapers and magazines.

The protest caused the street outside News Corp’s offices to be closed off with a police presence at either end of the street. Members of News’ security team stood at the front doors of the building.

‘Unfortunately we all have become too familiar with the lies spread by The Australian, The Daily Telegraph and their siblings across Australia …and the world,’ Senator Farqui told the gathering.

‘Day in, day out they do everything they can to deny climate science. Whether we like it or not that does shape public opinion… and public policy.’

Senator Faruqi took aim at the media giant for being ‘the flag-bearers of climate denialism in Australia,’ who ‘published extensive lies and conspiracy theories about hazard reduction and arsonists which were thoroughly and truly debunked.’

Australian academic and investigative journalist Wendy Bacon said Australia had ‘the most concentrated media in the Western world.’

‘There have always been warnings that this would undermine our democracies and it has indeed done that,’ Ms Bacon said.

She said both Labor and Liberal governments were to blame for Australia’s media concentration, ‘specifically… a Labor government in 1987’.

Ms Bacon said while News Corp did have many good reporters — some of whom she had taught — they were not able to produce ‘decent journalism…because if they stick their heads up they’re going to be either side-lined or … pushed aside.’

She personally knew of three journalists who had been, ‘pushed out because of their reporting on climate science’.

Both Senator Faruqi and Ms Bacon urged the crowd to vote with their wallets and make the companies who advertise with News Corp withdraw their ads from the company.

The protest was hosted by Brad Pederson who told the crowd ‘the average Australian worker pays 25 percent income tax…these guys had a revenue last year of $2.4 billion…you want to know how much tax they paid last year? — not a cent.’

Comment has been sought from News Corp Australia in response to the protest and the claims made by the various speakers.