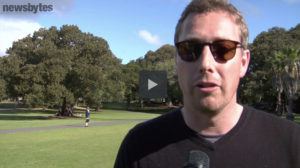 Trust in the news media is falling, with fewer than one-third of Australians saying they trust the media.

Mexicans, Canadians and Indonesians all have more trust in the media then Australians, according to an international study by the Edelman Group.

The Edelman Trust Barometer revealed that the trust Australians have in the media is at a record low of 31 percent, with only Turkey scoring lower at 30 percent.

It wasn’t all bad news however with the survey finding that trust in journalism was up 5 percent worldwide and that journalism was much more trusted then platforms such as social media and “influencers”.

In Australia fake news was a big cause in the falling trust of media in general which in turn led to a surge in trust for the more traditional news media outlets, which rose in trust from 46 percent in 2017 to 61 percent in 2018.

The findings were reflected in a Newsbytes poll in Sydney, where we asked people how much they trusted the media and finding out their habits of digesting news.

“(I trust the media) minimally,” said Zac Seidler, a psychologist working in Sydney who still reads a daily (physical) newspaper.

“I think over time its become more and more problematic, the amount of saturation that we’re reading makes it difficult to discern what is truth and what is just opinion,” Mr Seidler continued.

“(If I read it in a newspaper) I trust it a bit more because I know there are editors involved, whereas if I read it on Facebook or Buzzfeed… I’m not 100 percent sure of the validity of it.”

Susannah Smith echoed the results of the survey saying that while she didn’t trust the media as a whole, she did have more faith on what was reported by traditional news media.

“News media has to be a bit more rigorous in what they can publish,” Ms Smith said.

“Obviously they are liable for any … legal follow on that might happen, so I tend to trust them more.”

The Edelman survey found when they asked respondents to assume what was meant by the phrase “media in general”, 48 percent replied with the term “social”.

Tom Averill told Newsbytes that he thought the two were more indistinguishable then ever before.

“I think the lines between the two of them (traditional media vs social media) are much more blurred then they ever have been before,” said Mr Averill.

“Traditionally I would trust something more that I read in a newspaper then I would on social media.”

ABC News Brisbane chief-of-staff Anne Kruger, who is doing PhD research on ‘fake news’, told Newsbytes that Australia does have the potential to be exposed to fake news, given the volatile political situation where leadership spills have become the norm.

“However, we are somewhat protected geographically – we’re not the big global economic influencers like the US and UK,” she said.

“From my research, I’ve found there is an ‘interest’ from Asia to pick up on sensational and fake news stories from Australia – even when our own domestic media debunk or ignore the stories”.

She said that what should be of more concern for Australians was poor quality journalism.

“Australians do respond to ‘known’ good quality news brands – the ABC being the most trusted, with websites like ‘Junkee’ among the most least trusted when it comes to news,” she said.

“This actually gives hope, that Australians are appreciative of quality journalism – the issue is to make sure it is always easily available for everyone to access whether in the city or country.”

Looking into the future, Ms Kruger says that media literacy should be added to school curricula and should also be taught to older generations who haven’t been raised in the current environment of social media, smartphones and the 24-hour news cycle.

“It would be good to have units of this (news literacy) taught as part of school curriculum, and also for it to be taught to older generations who haven’t had as much experience with computers,” Ms Kruger said.

“Quality media companies like the ABC should be going to community groups and giving talks along this line.

“Accessing good quality sites needs to be built in as an easy-to-access – almost ‘stumble upon’ automatic habit. That’s something for the digital designers to keep considering too.”