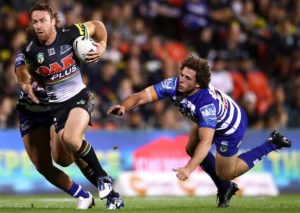 Panthers stand-in captain James Maloney avoids attacks from all sides as he powers through.

The Penrith Panthers secured their sixth win of the NRL season in round 8 on Friday night, beating the Canterbury Bankstown Bulldogs 22-14 despite losing their fullback Dylan Edwards to a shoulder injury.

Edwards injured his shoulder in the 13th minute meaning he will now join halfback Nathan Cleary on the sidelines.

The Bulldogs were quick to take advantage of the injury, scoring a try a minute and a half later through Marcelo Montoya.

Another try less then 10 minutes later to Will Hopoate had the Panthers down by 10 points.

The home team hit back however just before half time with Corey Harawira-Naera crossing the line to leave the score at 8-12 going into the half-time break.

The Panthers kept the visitors try-less in the last 40 minutes, the Bulldogs only points coming through a penalty goal at the 51 minute mark.

Both of Penrith’s second half tries were set up by their halfback and stand-in captain James Maloney who was instrumental in his side’s victory. He was the winner of the Anzac Round Medal and again showed why he is one of the players at the top of Brad Fittler’s list for State of Origin duties when the team is picked.

David Klemmer was sent to the sin bin with just over two minutes remaining, when he ran half way across the field instigating a push and shoving match between the two teams after a huge hit from Dean Whare on the Bulldogs No 6. Jeremy Marshall-King.

Maloney was modest about his role in the victory, instead showering praise on his team’s forward pack. “It’s unbelievable to play behind a pack that does what they do for us,“ he said. “I just point them around, they do all the hard work.”