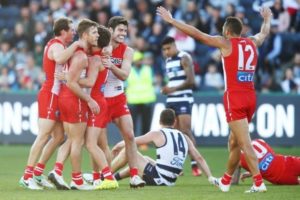 Winners are grinners – Sydney Swans celebrate after their last quarter defeat of Geelong.

A seven goal to one final quarter from the Sydney Swans propelled them to a much-needed away victory over the Geelong Cats at Geelong’s Kardinia Park/GMHBA Stadium on a sunny afternoon yesterday.

Sydney 12.14 (86) defeated Geelong 10.9 (69) in a seesawing affair where the result was confirmed only two minutes from the final siren in one of the most thrilling finishes of the season so far.

At three-quarter time Geelong looked to have sealed the game with a 22-point lead and possessed momentum heading into the final term led by captain Joel Selwood (23 disposals) and Geelong’s best Mitch Duncan (24 and 7 tackles).

The Swans had only scored one goal in the third term after a goalless second quarter as the absence of the injured Lance Franklin took its toll.

Nevertheless the fourth quarter brought a second wave from the Swans who, led by indomitable skipper Josh Kennedy, were irrepressible after the final break.

Kennedy (33 disposals, 13 clearances) and ruck man Callum Sinclair (39 hit outs), worked together to outmuscle and outclass Geelong in the clearances and push the ball into the forward 50 where Sydney’s host of small forwards kicked and scrapped their way to goals.

In a positive sign for the Swans seven players kicked goals, indicating they can win without relying on Franklin.

Tom Hawkins (2 goals, 2 behinds) worked hard for the Cats but looked troubled by back spasms that stopped him playing last week.