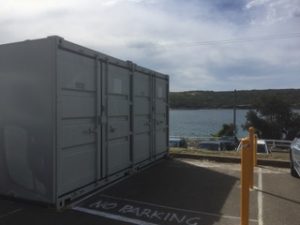 The recycling bin at Malabar - 'it's a bloody eyesore'.

7am on Sunday mornings is usually a time for sleep ins, but not for Malabar residents who have to put up with the sound of bottles crashing into trucks collecting recycled drink containers.

Angry locals say they had no idea what was happening when what looked like shipping containers were placed in the car park of Randwick Golf Club.

But now they have to deal with noise pollution during pick ups, as well as people depositing containers and bottles at all hours.

Following resident protests Randwick City Council has asked the golf club to remove the facility from their car park. Local resident Margaret Harris told a recent council meeting the Return and Earn facility was causing noise pollution as well as disrupting the views of the beach. She said she supported recycling but residents were concerned about the noise.

Another concerned resident, Frank Tropman, said he sees people making deposits into the machines at night. Mr Tropman, who lives directly opposite the golf club, said drops went late into the night.

“It’s disturbing. I work late at night and I come home at 10.30 and there are people over there dropping stuff – it’s ridiculous,” he said.

Residents also said they weren’t notified by the NSW government or the golf club that its car park would be used as a collection point – the first they knew of it was when the reverse vending machines were installed.

“I never knew anything about it,” Mr Tropman said. “They just lobbed them there. It’s a bloody eyesore. I didn’t realise all that noise was going to be associated with it”.

Return and Earn is a state government initiative designed to tackle the problem of the more than 160 million drink containers that end up as litter in NSW each year. The government has installed collection points around the state where people can deposit used containers, bottles and glass for a small refund.

Randwick City Council carried a resolution at its April 24 meeting to ask Randwick Golf Club to remove the Return and Earn bottle facility from their carpark, as it is affecting the amenity of the local residents.

A spokesman for Mr Daley, Dylan Parker, said the MP had spoken to several concerned residents and the golf club about the issue and had passed their concerns to Environment Minister Gabrielle Upton and Planning Minister Anthony Roberts.

“The Club has on their own volition endeavoured to insulate and decorate the machine,” Mr Parker said. “They are also in ongoing discussions with the contractor to manage pickups and operation times in a more resident friendly manner.”

Newsbytes sought comment from Randwick Golf Club but calls were not returned.