Community Service Department members said the children would not receive the same attention when the workers were gone.

Secretary of the union Together, Alex Scott, said the loss of temporary jobs in these vital areas was a very real concern for members, particularly those working the front line at child safety counters and in disability support.

“These temporary job cuts seem to be out of control and unsustainable,” he said.

“Our members are trained professionals who are deeply concerned about how job cuts are impacting the
vital services that Queenslanders are relying on every day.” 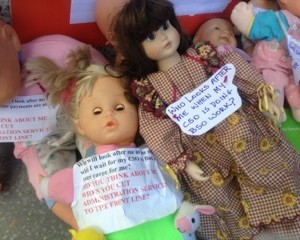 Dolls carried by demonstrators to draw attention to cut-backs in child services workers.

Public sector workers have been told they will lose their jobs by 30 June through the non-renewal of contracts.

Organiser Anna Pickering told a rally in Queens Park the union demanded answers from the government.

Ms Pickering said: “We are all realistic, we understand that a change of government means changes, but there are different ways to roll out a process like this.

After marching through city streets protestors reached the government services building in George St where several members were permitted to enter the building.

The rally concluded at 1pm with further chants and ear shattering noise, encouraged by the assistant secretary of Together, Kate Flanders.

“Great to see we can make some noise,” she said.