Electric cars on Australian roads lead the charge to a zero-emission future, but how soon will they become popular?

Newsbytes asked a range of people, including car experts and members of the public, to find a mixture of views.

Mitsubishi released the first mass-produced electric car to Australia’s fleet and government market in late 2010, and to the general public in January 2012 at a cost of $48,800.

Mitsubishi’s i-Miev, a four-seater light car, was more expensive than the petrol-driven Mazda MX-5 and Toyota’s hybrid models, Prius and Camry, but cheaper than the all-electric Nissan Leaf to be released this month.

i-Miev’s running costs will be released for the first time in June 2012, and details for the Nissan Leaf would be included in RACQ’s 2013 data, Mr Spalding said.

“Within this decade, electric vehicles will become price comparable across operating costs,” he said.

RACQ’s research showed buyers’ first concern was not price, but range – the distance that could be travelled before a recharge was needed.

RACQ’s i-Miev had a range of about 100 kms in field tests instead of the advertised range, “up to 150 kms.”

Mitsubishi’s i-Miev key account manager Mark Whyte said a 100 km range would suit most drivers, but range would vary due to driving style, road conditions, and other factors.

Mr Whyte quoted University of South Australia research that two-thirds of Brisbane residents travelled 50 kms a day or less, and 88 per cent travelled less than 100 km a day.

In a Newsbytes street poll, Queenslanders said more people were becoming environmentally aware and climate change may lead to the popularity of electric cars.

Chris, of Brisbane, said: “The big issue about electric cars is price because they’re going to be competing against established car products which are very cheap at the entry level [and] they may not be quite so suitable until they can get the range extended.”

The i-Miev may be recharged in seven hours at home or in 30 minutes at a commercial recharge station.

Chargepoint chief executive officer, James Brown, said at least five of their 60 public recharge stations were in Queensland and more would become available.

Office of Climate Change spokesperson Rod Goodbun confirmed strategic locations for recharge stations and the impact of electric vehicle (EV) ownership on the electricity grid were under consideration.

“With relatively low numbers of electric vehicles arriving in Queensland in the short to medium term and the early action by the Government, there is likely to be no impact on the grid over this time frame.”

Community groups and charity organisations have applied to borrow a Queensland government electric vehicle for up to three months under a Driving Change initiative.

Mr Goodbun said a number of very worthy expressions of interest had been received and successful applicants would be announced soon. 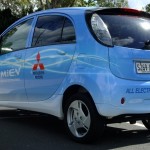 In mid-April, RACQ provided members with an opportunity to test-drive the Mitsubishi i-Miev.

Mitsubishi had provided five i-Mievs – a mix of model 1 and the new i-Miev 2 – in vibrant yellow, business grey and springtime blue.

The small four-seater cars have fluid lines, a small boot, and a tube of sealant instead of a spare tyre.

I missed the briefing on the three available drive modes in the i-Miev 1: B for high regenerative braking assistance – the feel similar to a manual car, D for standard driving conditions and economy, and, Eco for economy mode.

In the i-Miev 2, Eco has been replaced by C(omfort) mode for city cruising or highway driving.

As I drive a manual car, I found the brakes sensitive in D mode and acceleration required a hard push.

Steering is responsive, front and rear visibility is good, and the ride is smooth and quiet.

Mrs Rowe summarised the i-Miev as “a nice little car to ride in; not boxed in or claustrophobic. For a small car, it’s well-appointed and roomy inside”.

Mr Rowe said: “It’s not what I expected. There’s good visibility – the bonnet slopes down and you can see the road in front of you. Handling is surprising – it followed your instructions.”

His two primary concerns were the need to push down hard on acceleration and that the headrest could not be adjusted.

Mitsubishi i-Miev account manager Mark Whyte said braking and acceleration may feel different in other modes and he appreciated Mr Rowe’s feedback about the headrest.

Mr Rowe, a former Ford motor mechanic, is familiar with the Model T Ford Tourer (“one of the first automatic cars”), the introduction in cars of electric systems and gas conversion, and hybrid vehicles.

He predicted that future electric vehicles would have solar panels for continuous recharge.