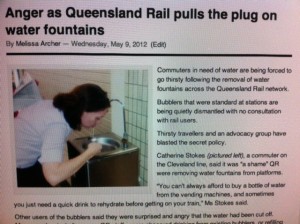 A State Government minister and a rail lobby group have congratulated Newsbytes on publicising the issue of water fountains being withdrawn from Brisbane railway stations.

Transport Minister Scott Emerson said Newsbytes should be credited for breaking the story, while Rail Back on Track spokesman Robert Dow said Newsbytes deserved congratulation for the “fantastic outcome”.

A front page Newsbytes story last Wednesday revealing the secretive removal of bubblers from stations resulted in reversal of the policy by Saturday.

Mr Emerson sheeted the blame for withdrawal of bubblers to the previous Labor administration.

“Newsbytes should be credited for their coverage of Labor’s policy to ban water bubblers highlighting yet another failure by the former Minister for Transport and now Leader of the Opposition, Annastacia Palaszczuk,” he said.

“I announced on Saturday that water bubblers will remain on Queensland train stations under the Newman government.

“Queensland Rail is currently reviewing different styles and models of water fountains that can be introduced.”

Rail Back on Track’s Mr Dow said the weekend decision to reverse the policy was a fantastic outcome for the travelling public.

“Newsbytes should be congratulated on bringing such an important issue to the attention of the new Transport Minister, and Rail Back on Track were thrilled with the outcome of the story,” he said.

Contributors to the Rail Back on Track forum, who were angered by the now defunct QR policy, said this was a great win for Queensland commuters.

One Response to “Newsbytes wins praise after bubblers ban reversed”