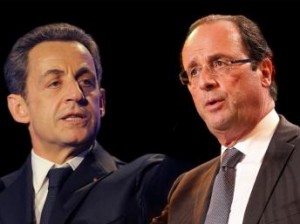 Every issue, from immigration to the economy to Afghanistan, was an opportunity for the two candidates to launch into a war of words.

Mr Hollande said he protected children instead of favouring the rich, referring to Sarkozy’s life-style and hand-outs.

“I wouldn’t take any lesson from a political party that wanted, with enthusiasm, to gather behind DSK,” he said, referring to disgraced former IMF head Dominique Strauss-Kahn, a previous finance minister who had been tipped to be the Socialist Party presidential candidate.

Mr Hollande was quick to retaliate.

“Speak the truth,” he said, and “you appointed everywhere all your close friends” as an all-mighty.

Mr Sarkozy replied: “You are lying. You want less rich people. As for me, I want less poor people.”

He said Mr Hollande’s close associates kept saying slanderous remarks to him during the primaries.

“Why not compare me to Hitler?” he said.

“Mr Sarkozy, you would have a hard time passing for a victim,” he said.

“Your friends compared me to who knows what beasts, to animals in the zoo.”

On the issues, Mr Hollande critiqued the economic record of Sarkozy.

He said it was because of Sarkozy’s incompetence that the national deficit was so high.

“You always have a scapegoat, it’s never your fault. Whatever happens, whatever goes on you are happy,” Mr Hollande said.

But the president said the financial storm that crossed Europe did not lead to the collapse of France, thanks to his decisions which proved to be right.

Mr Hollande said he wanted to increase by 60,000 the number of public servants but Mr Sarkozy said French people would have to pay more tax with this plan.

“It is a spending madness.”

The election for France’s next president will be held on 6 May.