How I tried to make a meal of Megadeath 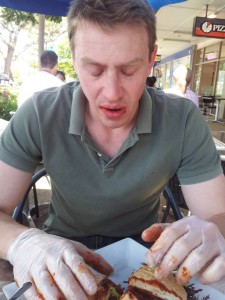 Off the Wall Diner is a humble burger joint in Wellington Point that says without hyperbole and on the authority of Guinness World Records that it makes the world’s spiciest burger.

The technical measure of spice heat is a “Scoville unit”. By virtue of some secret chilli concoction, Off the Wall’s “Megadeath Burger” has a claimed 5.5 million Scoville units – 10 percent stronger than United States police pepper spray.

To eat the burger, patrons must sign a legal waiver.

Off the Wall’s co-owner Jessica Fernald said the sauce was roughly 650 times hotter than an average jalapeño.

About 20 to 30 people a week have tried the meal over the past six years, she said.

Ms Fernland said there were no defining characteristics of people who manage to finish the burger.

“Everyone’s different. You’d think a big dude with tattoos and piercings all over him would be able to do it, but no: he’ll throw up and cry like a baby,” she said.

“It could be absolutely anyone. I had this tiny woman this week; a small little petite thing did it. She was stubborn as hell and she ate it all.”

Another equally stubborn customer refused to give up on the dish for the better part of a day.

“Eleven hours is the most it’s dragged on for. In October last year, he came in the morning and stayed until 9.20 at night. I had to say ‘eat it or get out.’ He stayed on a bit the size of a 50 cent piece for about five hours. He was lying all over the table moaning and groaning. I thought I’d have to call an ambulance for him,” Ms Fernland said. 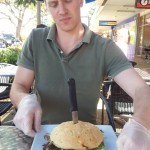 University of Queensland Nutrition and Food Science researcher Dr Eugeni Roura said such reactions, though possibly funny, are always indicators of possible damage to the body.

“If there is something general we can say about spices it is that the doses well above the ‘standard’ might indeed be detrimental,” he said.

“For example, pungency, at the end of the day, is a defence response, a warning signal that our sensors are sending to our brain and signals nothing else than potentially harmful substances.”

Royal Melbourne Institute of Technology School of Medical Sciences associate professor of toxicology Dr Paul Wright said even the experts in the field measured spices foremost through the lens of physical pain.

“Capsaicin is the active agent and it works on the nerves in your body that release ‘substance P’—which stands for pain. And that’s the whole physiological basis of why things feel like they’re burning, it’s because they’re releasing ‘substance P’,” he said.

“The reason you can eat spicier and spicier food the more you do it is because the ends of your nerves actually die and if you don’t eat it for a while, those nerve endings grow back. So when you only eat sweet foods and then eat your favorite chili again, it’s going to taste even hotter because your nerves are back responding again.”

But Dr Wright said although normally spices could be adapted to with practice, at the extreme end only a superhuman could withstand them.

“In the field of pharmacology, spiciness – as in chili heat – has its own rating scale. capsicum spray, the spiciness of which the burger equals, dissuades people from what they’re doing.”

The only time such amounts of the ingredient were ineffective was when people had taken the drug phencyclidine, also called PCP or “angel dust.”

“Normally it works unless they’re on phencyclidine, in which case quite often those people have to be held down by half a dozen officers because they basically have superhuman strength,” Dr Wright said. 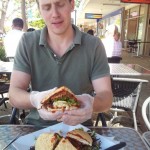 One such superhuman who was able to complete the capsicum spray’s chemical equivalent “Megadeath challenge” was James Murray, a 25-year-old IT expert in Brisbane. He agrees that the spice is too off the scale to prepare for.

“I mentally prepped myself for it. I was always sort of into chili food, but I think the thing is it’s so much hotter than anything else you can possibly imagine that no amount of preparation can really help,” he said.

“I’d eat all the chili stuff I could. But it was a totally different level. Not even comparable.”

The experience was more reminiscent of an extreme sport than dining out.

“The funniest thing for me was that as soon as I started eating it, my body just went into adrenalin overdrive. My glands just went crazy so for the first four or five minutes I was pretty fine because my body was so full of adrenalin. But then my hands started shaking and I started to feel nauseous. It was just like a massive adrenaline high and then after that you start to feel the pain.”

His strategy for becoming one of the rare few to finish the meal?

“I did it pretty quick, probably about 10 or 15 minutes. It’s the only way to do it – just smash it down. Once you stop eating it’s pretty much over, because to make yourself start eating it again would be impossible. Just don’t think about it and just eat it,” he said.

So, experts did not encourage the consumption of such level of spice, and even former patrons attested to the horror of the experience.

But this writer did humbly attempt the dish.

For me, the realisation of the gravity of the meal came somewhere between ordering and paying for it, when I was asked to sign the previously mentioned legal waiver.

I can’t quote from it because I wasn’t allowed to keep a copy, but its general theme was: we won’t be responsible if you die trying to impress your friends.

I was given a pair of rubber medical gloves, so I could safely handle the burger.

The shop itself was mostly kitchen and counter, with only one magazine-littered table inside. The option then, was by necessity an outdoor table, which was fine because the weather was too. The sun was shining, the bogans were singing in the pub across the road, and groups of young women in negligibly short pants walked along the strip under the vast canopies of jacarandas.

Then my Megadeath burger arrived. It came after a wait because it had to be prepared separately to avoid contaminating anything else in the kitchen.

How did it taste? 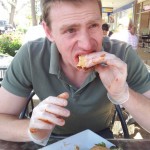 Well, for me, insignificant. The challenge is culinary, but not for a connoisseur. Soon after the first bite, precedence goes to instinctive fears for simple well-being. Notions of flavour belong rather high on any hierarchy of human needs, far, far above concerns about actual bodily impairment.

In hindsight however, I would describe the taste in those first few mouthfuls as dry with a slight hint of bile. But then the crippling, toxic agent’s evil shadow descended and my more advanced faculties fled and scattered.

Within a remarkably telescoped period of time, I was set upon by a variety of physical reactions. Of course there was burning, burning of an intensity I had never before experienced. But overlayed with this I began to convulsively hiccup. What’s more, my lips tightened up so I could barely open my mouth to speak, my face began to tingle with pins and needles, and my skin began to crawl.

Between the tears welling in my eyes, my vision was actually vibrating. Even looking at one point in the distance, objects shook rapidly from side to side as if I was watching a bad TV reception while sitting on the backseat of a bus. Mucus and tears ran freely down my face, and I was afraid to wipe it away in case I transferred even a trace of the noxious sauce to anywhere near my eyes.

For the first few bites I ran a narration for observers, physically- and psycho-analysing the unfolding biological bedlam. But by the first quarter I stopped this, following the partial paralysis of my face and mouth. My speech became increasingly fragmented.

“It’s spreading…to my back…I can’t feel my back,” I said in response to my friend’s nurturing pats on the back.

But, bothering to talk was fairly rare. The video evidence shows I mostly just emitted a kind of mournful bovine groan, complete with snot bubbles from my dribbling nostrils.

Thankfully, there seemed to be a plateau in the reactions and no new horrors came until the final bite of the first half, when I thought I would vomit.

I’d been told to avoid this at all costs, because it spread the spice into the sinuses, so I spat out the half-chewed blob and rocked back and forth in my chair, with my belly full of fire and my heart full of nothing but gladness I’d given up. 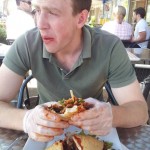 The result? The picture says it all

Immediately to hand (for an extra $5 you’d be crazy not to spend) was a “recovery pack” of yogurt and milk. I skolled the glass of milk with a few hearty gulps and lavished my fiery mouth with the honey yogurt’s sweet salve. This effectively disqualified me from the challenge and the prospect of having my name printed on the wall of fame for those few superhuman finishers, but by this point I was simply ecstatic the torture had ceased.

Over the next quarter of an hour I descended slowly back into a state of equilibrium and found myself high on a combination of mild pride and enormous relief. The pain had probably given me a kick of endorphins, much like a marathon runner. My body was still pumped on the exhilarative burst of neurotransmitters. Or at least this was what my friends explained to me as I sat grinning at passers-by like a barnyard imbecile.

I won’t go into the gory details of gastronomic fallout over the following 24 hours, but at that point I was a happy chap with no notion of further impending pain. As we walked back to the car, I gingerly sipped a strawberry-flavoured milk. I was still unsteady on my feet and gave the keys to my friends for the trip home.