Ash Grunwald loves that life on the road 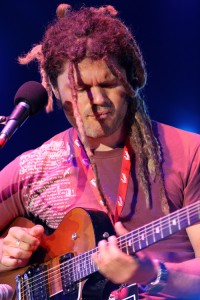 Ash Grunwald’s music is a mix of grungy folk dashed with a side of electric blues. His latest tour, “The Road Dog Diaries”, was named simply for the road tripping lifestyle he’s adopted.

“It comes from the title of my blog and it is basically what I am – a road dog. Always moving and on the road,” he says.

The blues artist comes from a background in Melbourne but spent a lot of time living in the country as a teenager, so naturally life on the road can be peaceful and time spent writing lyrics, listening to music and soaking it all in.

“We spend a lot of time on the road. Yesterday it was 16 hours and today it’s another six with interviews constantly. But it’s definitely the best part of my day. I get to keep busy and it’s much better than your typical 9 to 5 job.”

But does the waiting around get tiresome?

“There is a lot of waiting around but it can also be a good thing. I am constantly listening to music and audio books. Reading is great too. At the moment I am reading Keith Richards’ book (Life) and that’s something that I can really get into with long stretches travelling.”

Grunwald, who is currently on the road with his Road Dog Diaries tour due to hit Brisbane on 27 August, will not only be host to one of Australia’s gutsiest blues musicians but will feature a very special guest.

“Kram (from Spiderbait) will join me at various east coast gigs for a bit of a jam” Grunwald says.

This friendship was spawned out of an encounter several years ago at a festival that ran while the Quicksilver surfing competition was held on the Gold Coast.

“We first met there and someone asked us to perform something on stage, so we jumped up and had a jam together.”

The duo, which plan to team up soon to record something will no doubt bring together some interesting tunes based on both of their recording backgrounds.

He says he doesn’t want punters to walk away from his show with mixed emotions and simply leave with a smile on their faces.

“I want people to leave with a sense of optimism and a happy kind of vibe. People should feel like they’ve had a really good time and walk away positive rather than it being a dark experience that makes you feel angry.”

When asked who he regularly listens to and take inspiration from, Ash explains how life on the road has its advantages with plenty of downtime to explore different genres of music.

“Listening to music inspires me and you go through phases where you listen to music every day and it’s all around you through having a bazillion songs available on your phone, it gets a bit too much. I often turn to other outlets such as audio books, Podcasts and even reading to draw on inspiration to write a new song.”

Grunwald, who has recently been noticed by Hollywood and his song “Walking” features on the soundtrack for the movie “Limitless” says the recognition is thanks to bands such as The Black Keys for helping smaller musicians such as himself gain much needed exposure overseas.

“After the Limitless CD, I’ve had enquiries come from America for bookings which have been great. We have seen more hits on YouTube and the publicity has just been really good.”

“I’ve jumped in the studio recently for a few days and have already gotten around 20 songs for the new album, so that’s something I definitely will be working on whenever I have a few weeks free to start recording it,” he laughs.

Ash Grunwald plays at The Hi-Fi Bar on Saturday 27 August supported by The Grains. Hot Mama Vibes is now out through Mushroom Publishing: www.ashgrunwald.com.