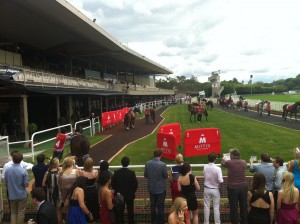 Clouds built and the breeze freshened but that wasn’t going to stop the thousands who came out for the annual Ekka races at Eagle Farm racecourse on Wednesday.

The fake tan had been applied, suits ironed and hair curled. Most of the spectators, mainly aged in their 20s, had been preened to perfection – and not only the ladies.

The Ekka races held on the Brisbane public holiday are a popular day for many to come out and enjoy the horse races which run all afternoon.

Hot favourite Achievements won the final race of the day with many wondering if the power horse would fly to the finish line after initially falling behind others.

In the final stretch it was a different story with the Darryl Hansen-trained four-year-old bay gelding storming past the others to take out the trophy.

But the day wasn’t limited to watching horses – with a small “nightclub” style room sponsored by dance festival Stereosonic bringing out many people’s interesting dance moves while two DJs mixed everything from ’80s cheesy tunes to hard house music.

The usual offerings in fast food were there including Ekka favourite the dagwood dog and a variety of cuisine from smaller food stands including Asian fried delights and gourmet chicken burgers.

Police presence was high with many having consuming a little too much red cordial and being escorted off the field. However most people were well behaved.

Brisbane Racing Club marketing manager Pru Reed said the day had become increasingly popular over the years especially with university students who didn’t have the same sort of money to splash around in comparison to the older punters throughout the year.

“Exhibition Wednesday really started as a dollar day over 10 years ago,” she said.

“I guess with that price point it really attracted the student market who are not necessarily as cashed up. From that point it’s really just grown to become a very iconic day for Brisbane and has still remained for anyone aged between 18 and 22.”

But with the global downturn causing many people to limit their social spending, how does the race day maintain its profitability?

“There has been a bit of a drop off in the last 12 months and I guess that’s a sign of the times and the economy,” Ms Reed said.

“Festivals around the country are suffering from a 30 percent downturn in ticket sales and unforunately we don’t miss out on that. Today we are expecting around 15 to 18 thousand people which is still a very good result and it makes this event one of the top three race days in the Brisbane Racing Club runs throughout the year, with the Stradbroke Day and Melbourne Cup being the other two big drawcards.”