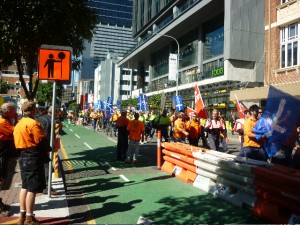 Hundreds of angry construction workers have marched on the Commonwealth Law Courts building to protest over contracts.

In their second major protest this year the workers took action yesterday against alleged sham contracting in the construction industry.

About 500 workers from four unions stopped work to protest the court’s recent finding against them, as well as new evidence from an independent investigation.

Workers were from the Plumbers’ Union, Electrical Trades Union, the Builders Labourers Federation and the Construction Forestry Mining and Energy Union.

The issue centres on Lend Lease’s construction of the Gold Coast University Hospital, which both Crown and commercial investigators found free of fault, against the independent Don Brown inquiry that found evidence of employees being misled about rightful entitlements.

He said the government was not doing enough to punish and discourage bad employers.

“This government has become lazy. They’re only hoping the building companies will do the right thing by the taxpayer and the workers,” he said.

“They’ve lost total control of this. There’s no transparency and accountability.”

“They’re always getting undercut by corrupt subbies and the big end of town,” he said.

Industrial Relations Minister Cameron Dick said through a spokesman the government had made appropriate efforts to find a solution to claims of sham contracting.

“The Queensland Government shares union concerns about the use of sham contracting,” he said.

“This is why we convened an industry reference group to review the issue [which] includes industry leaders and union representatives.

“It will report back to government by the end of September and we will give serious consideration to the contents of that report.”

Lend Lease says it is the unions who are in the wrong.

“The Court issued an injunction to stop continued illegal union activity, which had included a number of work stoppages on two of our Queensland projects – in breach of existing orders by Fair Work Australia,” Lend Lease spokesperson Darrin Davies said.

BLF secretary Kane Pearson said the union had been fined more than $2 million.

“We will not be intimidated,” he said.