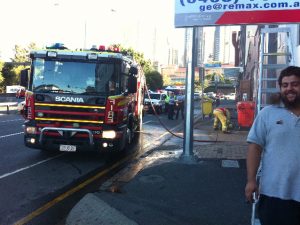 Fire engines rushed to put out a fire in a Fortitude Valley nightclub mid-afternoon Friday.

Police confirmed that at least 12 emergency services personnel, including two fire engines, two police wagons, and one ambulance rushed to the scene automatically after fire alarms were activated at The Jungle nightclub in McLachlan Street.

They said fire officers were “blowing out the smoke, to see what caused the fire”.

But Jungle Nightclub staff member Tim Baili, who had tried to control the blaze, said it was caused by stray cigarettes combusting the alcohol in empty liquor bottles and garbage.

“There’s this area out back that all the bartenders from the clubs around here go to have a smoke,” he said.

“The rubbish must have caught on fire.

“We put it out twice but the alcohol just fed it, and it started again.”

Surrounding clubs with access to the area include The Mustang Bar, Alhambras Lounge, Cloudland, Zuri Lounge and The Jungle Nightclub.

Police said the fire had “been contained to a small room just near the kitchen”.

No surrounding apartments were evacuated, but the busy McLachlan Street tunnel into the valley had two of its three lanes blocked.

One Response to “Fire in Valley nightclub”