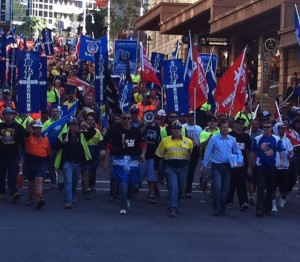 After marching through the city, building workers filled the huge leafy garden terraces at the executive building in George Street where they were addressed by union officials who called through loud speakers for “a peaceful and loud demonstration”.

The protestors included members of many trades including builders, plumbers and electricians. They yelled slogans and chants for more than an hour before peacefully breaking up at about 11am.

Lend Lease was the target of most workers’ concerns. They said the company was using contractors to hire below-award wage workers, and in many cases not even paying them superannuation.

Project manager Sunny Manual said he was not paid super from 2009 until after last week’s strike at the Gold Coast hospital. See video: Construction worker feared ‘pauper’s grave’. He said he knew of another worker, son of a rugby league “legend”, who had not been paid super since 2008. “The pay slip showed money was taken out but had not been put in the fund,” he said.

Workers at the Gold Coast Hospital building site have been on strike for the last 12 days. Industrial action has spread to other government building sites including City Hall, law courts and the Queensland Children’s Hospital.

“This has been going on for years and it has come to a head,” he said. “Working families have had enough.

“Many conditions have been slipping away using sham contractors over the years.”

Mr Ravbar said the Gold Coast site was out indefinitely. “We will revisit all sites on Friday,” he said.

“This is not a normal Brisbane thunderstorm, this will not go away,” he said.

“The only ones who are winning out of this is Lend Lease.”

Asked about evidence that workers were not being paid superannuation Mr Ravbar said: “Yes there is plenty of evidence, but Lend Lease has not done an audit as yet. They don’t want to do one as they know they will have to pay out a lot of money to workers when they do.”

He said the Queensland Government was examining the legalities of contractual arrangements, but needed to move more quickly.

“Unfortunately the Government has been extremely slow at taking any action,” he said.

“Workers have to leave their work and lose pay to get attention to the problem.”

Asked to respond to the union claims, Lend Lease said it would investigate specific allegations.

“Employment terms and conditions are a matter for individual employers and their employees,” a Lend Lease spokesman said.

“Any specific allegations put forward to us by the unions or their members will be investigated and we encourage subcontractors to work through any identified issues with their employees.”