Police were called to escort independent Nicole Johnston from today’s Brisbane City Council meeting after she refused to obey a suspension order.

She was also threatened with a fine of $5,500 for disobeying the ruling.

Cr Johnston was last ejected from the council in March in a blaze of publicity on the day former lord mayor Campbell Newman announced his resignation.

Today she was repeatedly ordered to leave the meeting by chairman Cr Krista Adams and CEO Colin Jensen shortly after 2pm. She refused, and all other councillors were asked to leave. 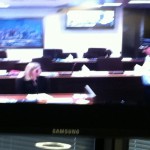 Within minutes a police inspector entered the chamber, spoke to Cr Adams and Mr Jensen, and then spoke to Cr Johnston as she sat alone in the chamber. After a short conversation she left with the inspector and was escorted by him to the building’s lifts. Two women constables were also present.

The councillor for Tennyson had been suspended earlier today at a heated meeting of the Council’s Environment and Parks committee.

Cr Johnston was adamant that “the sub-committee does not have the authority to expel me from full council”.

She said the suspension breached council rules and was against the council’s own legal advice. 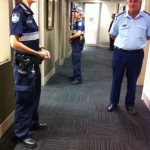 Police wait outside the council chamber

Cr Johnston said she would complain to the Queensland Local Government minister and the state ombudsman.

“They kicked me out of the LNP and now they’re trying to push me out of council,” she said.