“I’m not much into gongs and awards usually, but this recognition from a journalism college that’s fast making a mark is something I do value,” he said.

“I had virtually no training going into journalism apart from a pretty useless arts degree, so it’s nice to have some acknowledgement I’ve learnt something on the way through.”

Mr Oakes, who was unable to leave Canberra during the parliamentary sitting week, pre-recorded his graduation address, saying he wished he could be at the ceremony to receive the award personally.

He told the graduates and their friends and families he was pleased and surprised to see young people still wanted to go into journalism, ignoring all the doom and gloom about the industry.

Despite past pessimism, there was a lot more positivity among journalists about the future of their craft in the new media environment, and students were right to think there was still a worthwhile career to be had in the field.

“The bottom line is there will continue to be a need for people with the qualities we’ve always expected from good, professional journalists,” he said. 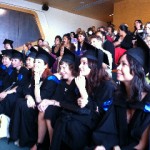 The ability to tell stories and gather and connect information, along with a healthy scepticism, curiosity and a nose for news were the hallmarks that set good journalists apart.

Mr Oakes said although the changing media environment would pose challenges in maintaining quality and accuracy, it was also an exciting time for new journalists to be entering the field.

He said Mr Oakes was known as a leader in the Canberra press gallery, who had throughout his career achieved a series of scoops, including acquiring and publishing the entire 1980 federal budget before its release. During the 2010 election he was described by colleagues as the most powerful journalist in Australia, his leaks changing the course of the campaign for several weeks.

Professor Henningham paid tribute to Mr Oakes’ courage and independence, and said he was a model for the journalists of the future.

“His weekly column is a model of acute observation and commentary, marked by spare writing and original insights. He is entirely non-partisan and fair, a critical judge and a bastion of common sense,” he said.

Professor Henningham said the calibre and clout of Laurie Oakes was best illustrated by his public criticisms of Channel 9 over its use of former Opposition leader Mark Latham as a 60 Minutes reporter.

“Oakes robustly condemned Channel Nine while being interviewed on Channel Nine,” he said.

“While most journalists who did that would not be around very long, he was effectively thanked by his network for expressing his opinions.”

The new Diploma of Journalism graduates celebrated the event with a CityCat ride up the Brisbane River in their academic robes to the Regatta Hotel, followed by karaoke.

Laurie Oakes’ new book, On the Record, will be released nationally next week.