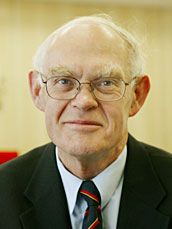 The man who challenged the Rudd Government in the High Court over the constitutional legality of the $900 economic stimulus bonus will continue his campaign to “fix the federation” by standing as a Senate candidate in next month’s federal election.

Law lecturer and former barrister Bryan Pape (pictured) told Newsbytes today he would file his nomination on Tuesday in New South Wales as an independent.

“I’m about fixing the federation,” he said.

“Currently there is a mismatch between spending and taxation and a lack of accountability has risen to incompetent state and federal governments.”

Mr Pape said his decision to run as a senator stemmed from the case he mounted last year against the Rudd Government’s Tax Bonus for Working Australians Act (No. 2) 2009 in which he argued the payments constituted a gift, not a tax measure, for which the government had no constitutional powers.

Despite a majority of the seven judges who presided over the case ruling against him on the use of the executive and the incidental power, the Commonwealth and the intervening states of NSW, WA and SA, had their primary argument on the appropriation power unanimously rejected.

“I want to get a standing in the High Court to challenge legislation or appropriation of monies which have violated the constitution, for example, direct payment to local councils,” he said.

“Ms Gillard proposes to set up a fund of $200 million for the purpose of making direct grants to 15 Queensland Councils for housing construction.

“On its face value the Commonwealth Parliament now has the power to do this but it is unconstitutional.”

My Pape said if Australians want to confer more powers on the Commonwealth they must formally change the constitution through a referendum as provided by section 128, but cited laziness as a reason for people not wanting to argue the case.

“A lack of accountability is a common failing,” he said.

“It is worth noting that 90 percent of the physical assets of Australia are owned and operated by the states and territories yet 83 percent of all taxation is raised by the Commonwealth.

“As Sir Earle Page said; government is finance, finance is government so it is a muddle which no political party has the courage to fix,” he said.

Mr Pape said until then, the Commonwealth should concentrate on defence, external affairs, trade, and commerce.

The former office holder and member of the National Party and Liberal Party of Australia said the Commonwealth was not a state government but presently duplicates state functions.

But with federalism high on his agenda, Mr Pape said he would also champion the government to promote the use of nuclear power.

He generally supported the proposals contained in the December 2006 report of the taskforce chaired by Dr Ziggy Switkowski into uranium mining and would agitate for the repeal of nuclear facility Acts in New South Wales, Queensland and Victorian governments.

“The establishment of a nuclear power industry in Australia is long overdue,” he said.

“Australia has about 40 percent of the world’s largest low-cost uranium reserves and it is absurd that these resources remain largely undeveloped.”

The University of New England lecturer, who resigned ahead of Tuesday’s application submission, said he would also seek to regionalise Australia to ensure the population is more evenly spread.

Mr Pape said with four out of five Australians living within 50km of the coast and more than half of Australia’s population living in three main enclaves or “paddocks” within NSW, Victoria and Queensland, the Commonwealth should focus on setting up more agricultural states.

“Queensland should be split into three states, this was mooted as a condition of entry into the Federation in 1901 and NSW, at the very least, should have the new states of New England and Riverina,” he said.

As to whether the two main political parties would share in his sentiments Mr Pape said their ideologies were of a different standing.

“The Labor party is incompetent and Gillard, while clever and cunning, has no vision for Australia,” he said.

“And Mr Abbott generally follows conservative principles which I endorse but seems to eschew federalism, as do most of his colleagues.”