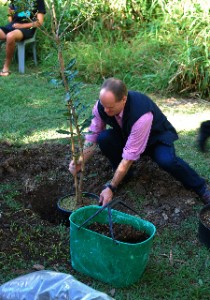 Controversy over the new Graceville community garden continued to rage at last week’s Brisbane City Council meeting, with rebel councillor Nicole Johnston repeatedly asking the administration to table a report on the garden.

The 33-page report was funded by Council and prepared by the Benarrawa group, a small community-managed organisation based in Graceville which supported the garden.

Cr Johnston represents the ward (Tennyson) where the garden is located, but opposed putting the garden in Faulkner Park.

However, a year-long campaign by garden advocates and the presentation of a petition convinced the ruling Liberal National Party to approve the location.

Since the controversy began Cr Johnston, who fell foul of the LNP over establishment of a bus depot in Sherwood, has resigned from the party and now sits in the Council as an independent.

In Council’s weekly question time Cr Johnston asked Neighbourhood Planning and Development Committee chairman Amanda Cooper to table the Benarrawa report “so that every councillor can see what is contained in this report prepared by the Benarrawa group”.

But it was the Lord Mayor who rose to answer, saying, “The files are available for every councillor. The councillor (Johnston) is free to inspect the file and see the report.”

The community garden at Graceville was officially opened last Sunday. Cr Newman said hundreds of people attended the celebrations over a three to four hour period.

“What I saw was a group of dedicated enthusiastic community people, who were absolutely delighted that they had a chance to go forward with this community garden,” he said.

Cr Newman said it was important to put divisions over establishment of the garden into perspective.

“I understand that this has been a controversial thing,” he said.

“I looked around and people were looking back at me and I said ‘It’s only a garden’, and you know what, there was this huge round of applause.”

Photo: Campbell Newman plants a tree to celebrate the opening of the community garden