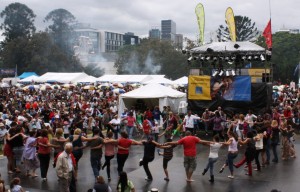 Queenslanders flocked to the Paniyiri Festival in record numbers over the weekend to enjoy all things Greek. More than 75,000 people attended the two-day event compared to last year’s attendance of about 45,000.

About 30,000 people went to the Festival on Saturday alone, a 40 percent increase on last year’s attendance for the same day, according to marketing consultant Lorraine Monsorte.

Paniyiri, held annually to celebrate Greek culture, is in its 34th year in Brisbane. Chairman Chris Kazonis said the festival promoted Greek art, culture and religion and blended that with food, drink and dance.

“It’s showcasing to the people of south-east Queensland what Greek culture is,” he said.

There were many headline acts this year, most notably by self-appointed Greek goddess, Effie, who compared parts of the Festival.

There were lots of famous Greek dances, including performances from the Gold Coast Greek dance school and the Hellenic dancers.

Some festival-goers participated in an impromptu performance of the famous Greek dance, the Zorba, which captured the celebratory mood of the festival well.

Lord Mayor Campbell Newman, who officially opened the Festival, said Brisbane was a vibrant multicultural city which embraced different cultures from around the world.

“It’s just a thrill to see Paniyiri 2010, a sea of people just having a wonderful time,” he said.

Cr Newman surprised Greek Community president, Jim Georgiou, when he announced a Festival funding increase from $20,000 to $30,000 for next year’s Paniyiri.

More than 900 volunteers were needed to keep the festival running smoothly and it did just that. The atmosphere was relaxed, with many families there to enjoy a fun day out.

There were also tours of nearby St George’s Church, and illustrated scholarly talks on the ancient Greek gods in the Greek Club.

One festival-goer, Luke Simpson, said there were many more people at the festival than the first time he went four years ago.

“It’s great. Love the entertainment and the food is just terrific,” he said.

“There was a bit of a line up but we certainly enjoyed the food once we got it.”

Among the 30 Festival food stalls were many Greek favourites to choose from, including souvlaki, pastitsio, haloumi and, of course, Greek salad.

For the sweet tooth there was an infinite supply of honey puffs and baklava.

But if you really wanted to gorge yourself there were both olive and honey puff eating competitions.