Early morning rain and cold did not stop more than 300 protesters gathering at Reddacliffe Place in the city yesterday morning to call for rescue of the historic Regent Theatre.

Regent building owner Industry Superannuation Property Trust plans to keep the Regent’s historical components but turn the rest of the building into a 38-storey office block.

The grand foyer and marble staircase will be saved, but the four cinemas will be demolished to build a 300-seat cinema and two 60-seat theatrettes.

Stop the Regent Being Knocked Down organiser Jason Sharland said the Regent Theatre’s cultural heritage should not be lost to another CBD office block.

He said Queensland Premier and Arts Minister Anna Bligh was forgetting her promises to keep the arts safe in her support for this demolition.

“It will destroy the cultural heritage of the Regent,” he said.

Ms Bligh has said the cinema will be open to the public on weekends and public holidays. On weekdays it will be used for seminars and speech presentations.

Brett Debritz’s Save the Regent group, with more than 8000 members, said he agreed wholeheartedly with the organisers of the protest. 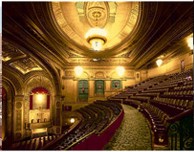 “Despite spin from the developers and, sadly, the Premier and Arts Minister, the small so-called ‘boutique cinemas’ included in the office-tower plans are no replacement for the Showcase, which contains material from and evokes memories of the 80-year-old original Regent auditorium,” he said.

“The government-endorsed and council-approved plan for the Regent does not protect the iconic Showcase cinema, the ornate bar area or the original Elizabeth Street facade of Brisbane’s last remaining Hollywood-style picture palace.”

Mr Debritz hopes the protest will inspire developers to go back to the drawing board.

Many protesters say the Regent should be returned to its 1920’s “picture palace” glory.

Queensland convenvor of the Cinema and Theatre Historical Society Steve Maggs said although he was not optimistic about the Regent being saved, he was hopeful.

“It would be great if the Regent could be restored, like the Regent in Melbourne was, and it’s already survived one attempt to be demolished,” Mr Maggs said.