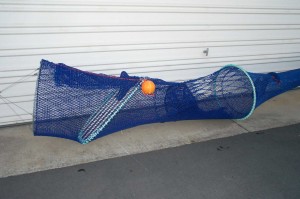 A device (pictured left) that lets turtles escape from prawn trawling nets has opened the way to increased overseas markets.

The United States’ granting of export accreditation to Queensland prawn trawlers would open a vast export market according to Fisheries Minister Tim Mulherin.

Mr Mulherin said the new accreditation meant Queensland’s trawl fishers were now part of the largest export market in the world, with the US importing more than 540,000 tonnes of prawns each year.

“Previously our trawl industry hasn’t been able to export Queensland prawns to the US because the requirements for this market haven’t been met,” he said.

“The enhanced level of sustainability in Queensland’s trawl fishery is largely due to the introduction of new turtle excluder devices (TEDs) specifications and the subsequent Queensland Government rebate scheme.”

A TED, attached to a prawn trawling net, is a grid of metal bars with an opening at the top or bottom that creates a hatch to allow sea turtles and larger fish to escape.

Fisheries legislation last year changed the specification for TEDs and made them mandatory.

A government rebate was offered to trawler operators to buy the new gear compliant with the new specs.

The University of Queensland’s research scientist in marine vertebrate ecology, Dr John Kirkwood, said this week TEDs were very effective at reducing the number of turtles caught in trawl nets.

“Various studies conducted by CSIRO Marine Research and Queensland’s Department of Primary Industries and Fisheries have shown that TEDs reduce the bycatch of sea turtles by 95 to 99 per cent,” Dr Kirkwood said.

He said other marine life that could be caught in trawl nets, including stingrays, sponges, squid and sharks, benefited from the use of TEDs as well.

“This reduced bycatch has also reduced the damage that these large animals cause to the prawn catch, so has also been beneficial to the fisherman,” he said.

TEDs cost $250 each and up to a maximum of four TEDs can be claimed per licence. The rebate scheme closed on 31 January this year.

Mr Mulherin said rebates had been paid for about 450 TEDs with the expectation further rebates would be paid for an additional 400 pending the completion of orders and receipt of applications.