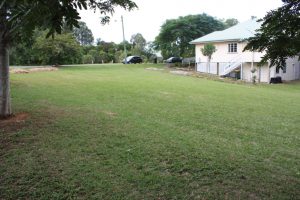 Site of the Graceville community garden

After more than a year’s planning and despite opposition from the local councillor and some residents, the community garden in Faulkner Park Graceville will officially open today.

The site (pictured) was chosen from several possibilities in the area because of its location and accessibility to the Benarrawa Community Development Association.

Graceville community garden committee co-ordinator Paul Grace said they had a great relationship with the people who run the Benarrawa Association and this was a major reason for choosing the site.

“They have permitted us to use their kitchen, toilet and storage area underneath their building. These are three facilities that are essential to operating a community garden,” he said.

Along with Benarrawa, the Brisbane City Council (BCC) and Jane O’Sullivan’s bush care group in Faulkner Park have given their full support and help, Mr Grace said.

“The council has been fantastic and have encouraged us to go on,” he said.

Not everyone in the neighbourhood has been supportive, however. Some residents, as well as the councillor for Tennyson ward, Nicole Johnston, opposed the idea. Their main reason was that there wasn’t enough room in Faulkner Park for a garden.

“We were surprised that anyone would be against a community garden,” Mr Grace said.

Faulkner Park is 11 hectares and we were asking for just 1.5% of that, he said.

Petitions supporting and opposing the garden were submitted to BCC. The petition in support had many more signatures, and final approval for the garden went through Council this month.

Mr Grace hopes the garden will be used by all people of all ages.

Nearby multi-ethnic Milpera High School and Graceville Primary School and kindergarten have shown interest in using the garden to teach their students.

“We would like to use the garden as a living classroom to educate the youngsters about global warming and sustainability,” Mr Gracesaid.

Workshops teaching different aspects of horticulture have been running at the garden since February and so there are a couple of plots of peas, beans and tomatoes already growing, along with beetroot, swiss chard, arrowroot and various herbs.

Mr Grace said the rest of this year will be spent developing the garden, creating garden beds out of sleepers during their Sunday morning working bees.

“Some of these garden beds will be allotted to individuals next year,” he said.

Northey Street City Farm in Windsor was created in 1994 as one of the first community gardens in Brisbane. It grows fruit, vegetables, bush tucker plants, shrubs and ground covers over four hectares. A Sunday market sells produce grown at the garden.

Volunteer Rossco Perrin, who has worked there for seven years, said that volunteering is a good way for people to learn about gardening.

“They come along and work alongside people with knowledge and then want to share their knowledge and so everyone learns,” he said.

There will be a welcoming from an Aboriginal elder and Cr Newman will plant a macadamia tree in celebration.

As well as local music acts there will be Hari-Krishna food, sausage sizzle and homemade cakes and slices baked by the Benarrawa Association.

“It will be a veritable feast,” Mr Grace said.