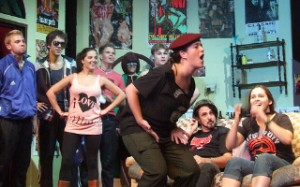 This is a raucous play about the depraved and crazy antics of a flatshare in Brisbane.

Designer Richard Hunt has done extremely well in setting the predictable scene of the housemates’ living room. Posters of bands line the walls, empty bottles of alcohol are stacked everywhere, random junk lies strewn around and in the midst of it all is an old worn-out couch.

Shaun King as author John Birmingham guides the audience through the two-hour play, retelling the exploits of his fellow housemates and the twists and turns of their life at 10 York Street.

All the characters are played with great enthusiasm and conviction. Amy Currie, who portrays Stacey, is very convincing in her role as ‘den mother’ of the flat and of them all, she is the most stable.

Jordan as the evil new housemate, intent on stealing everything valuable from the flat, is a very camp homosexual, and Daren King masters this role with all the theatrics it warrants, mincing around the stage and becoming very upset over nothing.

Elizabeth Best plays a memorable character called Jhelise, a South American revolutionary who tries to defend the flatmates against nasty property developers. Her rants leave nothing to the imagination and, while not on stage for long, she is definitely not someone you will forget.

And then there are the three Tasmanian babes, acted by Elizabeth Best, Lauren Ware and Jenna Saini. Their characters are very dim-witted and shallow, and all three capture the babes well. Their crowning moment is a well choreographed and energetic dance to Beyonce’s song Single Ladies (“Put a ring on it”), which has the audience pumped up and wanting more.
The script is rude and crude, filled with drug taking, sexual innuendo and a staggering number of swear words. What at first is shocking soon becomes repetitive, and while I’m not prudish and found most of the script’s humour funny, I became slightly bored with it. I found no real substance in this play and the scene where an attempt was made to convey some deeper emotion between Stacy and John didn’t work for me. It just felt out of place with the rest of the show.

Written as a novel by Birmingham in 1998, the work has been adapted for the stage by playwright Simon Bedak. He and director Natalie Bochenski have worked very hard at updating the script to make it relevant for today. Natalie has cast her actors in their roles perfectly, with each showing total dedication to the character they’re playing.

The play has a lot of talking, but this is broken up intermittently with fantastic dance sequences, an action freeze, and a trippy hallucination scene, in which lots of bears and rabbits dance around two of the housemates who have taken drugs. There are quick scene changes which help keep the flow of the play going smoothly.

So if you want to see something light, funny and totally bizarre and don’t mind nudity and offensive language, I would recommend this Fiasco.