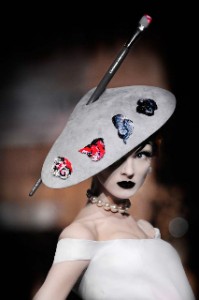 Hats, hats and more hats, in every shape, style, colour and size imaginable. If this sounds like your idea of heaven then head to the Queensland Art Gallery, where the exhibition Hats: An Anthology by Stephen Jones, is currently running.

The exhibition is a collaboration between London’s Victoria and Albert museum and one of the world’s leading milliners, Stephen Jones. It explores the art of millinery, from inspiration and creation of the hat, to the client who carries the creation to the world. A vast array of hats are showcased, from a tartan turban from the 1820s, to a bright orange tutu hat made of tulle, to a hat aptly entitled ‘Sex on the brain’ – two figures made of straw copulating on your head. Think of anything weird or wonderful and you’ll probably find it as a hat in this exhibition.

It also features hats worn by well-known people, such as the bridal headpiece created for Camilla Parker-Bowles’ marriage to the Prince of Wales, and the feather and silk hat worn by Sarah Jessica Parker to the London premiere of her “Sex and the City” movie. Two of Jones’ own creations on display are the brown feather hat worn by Mick Jagger on the Rolling Stones Bigger Bang World Tour and Kylie Minogue’s Visor hat from her Showgirl Tour.

If, after overloading your visual senses walking through this exhibition, you have a burning desire to create a hat of your own, and then you’re in luck. The ‘Top Hats’ art centre provides plenty of colourful card and tissue paper so anyone can channel their artistic ability and create a masterpiece. While this is aimed at children there are just as many, if not more, adults participating and having fun. The Hats: An Anthology exhibition has something for everyone.

One Response to “Hats hats hats at QAG”