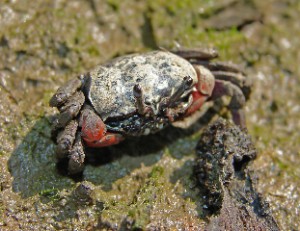 DNA testing played a major role in a Gladstone courtroom last Tuesday in the prosecution of a commercial fisherman who sold female mud crabs.

The tests proved the muddies came from Queensland, not from the Northern Territory as the fisherman claimed.

The fisherman changed his plea to guilty after being presented with the prosecution case that included DNA evidence. He was fined $45,000 plus $7,000 costs and his fishing licence was suspended for six months.

Meanwhile industry experts say the black market for mud crabs in Brisbane is alive and well.

“Some restaurants sell it as an under-the-table dish. It’s very sweet and fatty,” Mr Tran said.

Queensland Seafood Industry Association Crab Committee Chairperson Tony Risenweber said the government does not want to know about the poaching.

“The government gives fisheries no money to police it,” Mr Risenweber said.

Mr Risenweber said he supported the government’s use of DNA testing that can differentiate Queensland and Northern Territory mud crabs.

“I think it’s a necessary tool for them because, a lot of people are claiming, if they get caught with female crabs, they’re coming from Darwin, and this way they can prove categorically that they come from Queensland,” he said.

Fisheries Minister Tim Mulherin said it was the first time DNA results had been used in court in Queensland to successfully prosecute.

Employment, Economic Development and Innovation spokewoman Kirsten Phillips said it was one of three cases where DNA testing was involved. The other two other cases are still to go through the courts.

The Department of Primary Industries 2008 figures show a statewide total harvest of 1,558 tonnes of mud crabs.

Queensland is unique among Australian states in that it limits fishers to harvest only male crabs. It has been against the law to take female mud crabs since 1914, an attempt to ensure the growth of the mud crab population.

People who keep female or undersized crabs face fines of up to $100,000.

Department of Primary Industries and Fisheries Senior Molecular Biologist Dr Jane Oakey, said if the meat was already processed there is no reason DNA testing cannot be used to establish both the gender and region of the crabs.

“We haven’t had to check that yet so I wouldn’t have a clue what to do if you gave me one right now. There will be DNA differences, yes, but I don’t know what they are at this stage,” she said.