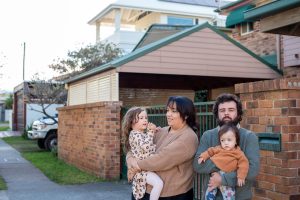 Tyla Kanasa and family: they fear they can never afford a house. (Photo: Nelli Saarinen)

With the rising cost of living, historic rental shortages and booming house prices, the Labor government faces a tough task.

Housing was a defining issue in the federal election, but according to Dr Heather Shearer, a researcher at Griffith University’s Cities Research Institute, there are no easy solutions.

‘Housing affordability, unfortunately, is what urban scholars call a “wicked problem” because it’s just so complex and it’s got so many different variables,’ Dr Shearer said.

The issue has become dire in south-east Queensland, with Brisbane and Gold Coast house prices rising by 32.2 percent last year, more than any other Australian major city.

As a result, the dream of homeownership is becoming unattainable for many.

Homeownership rates across the country have continued to fall over the last 20 years. In Queensland, 36 percent of householders now rent their home.

Meanwhile, rental vacancy rates have hit a record low of 0.4 percent on the Gold Coast.

‘It’s never been as bad as this,’ Dr Shearer said, citing interstate migration during the pandemic as one of the factors that have escalated a pre-existing problem.

Queensland received more interstate migrants than any other state during the pandemic, mostly from Victoria, where wages are higher.

Tyla Kanasa, a 29-year-old marketing professional from Brisbane, is not optimistic about being able to enter the property market, despite both her and her partner working well-paying jobs.

‘I don’t think a normal person, a person earning a pretty decent salary, is ever going to be able to afford it,’ she said.

Ms Kanasa and her partner had been saving for a house deposit for a few years when they were forced to drain their savings to stay afloat.

While Ms Kanasa was on maternity leave with their second child, her partner broke his arm two days into a new job and was unable to work.

They have now abandoned the idea of buying in Brisbane and are looking in Ipswich instead.

They aim to save as much money as they can over the next few years, but Ms Kanasa worries other buyers will also look west, leaving them outpriced again.

Policies that drive down house prices would be unpopular among voters who already own homes, but Dr Shearer believes the situation is unfair to the younger generation.

‘We can’t just have this oligarchy-type society with the haves and have-nots. People who have houses also need to care about the people who don’t,’ she said.

It’s a complex problem that requires a complex solution and political will on both the state and federal levels.

Dr Shearer said south-east Queensland needed more diverse and medium-density housing, such as duplexes and townhouses, not just detached houses in the suburbs and high rises in the CBD.

‘South-east Queensland in particular… is very sprawled. It’s got lots and lots of what they call single residential properties [or] detached houses, and they’re not really suitable for anything more than one family,’ she said.

‘The houses are badly designed; they’re only really designed for the theoretic nuclear family which is not the main household type now anyway.’

Another important piece of the puzzle is building more social and affordable housing.

‘We need the government to understand that housing is a human right, and they need to do something.’

Policies like the First Homeowners Grant, on the other hand, merely push up property prices for all, Dr Shearer said.

Ms Kanasa would like to see the government alleviate cost of living pressures in other areas to allow people to save more.

‘My biggest issue is paying thousands of dollars in childcare each year,’ she said.

‘If we [had] free childcare, we could save an extra $550 a fortnight. And then not having to pay health insurance if healthcare was better, that’s another $120-something a fortnight. There are so many policies that could contribute to make living more affordable or make people able to save better.’