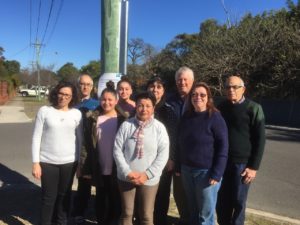 Angry residents gathered in front of a telco base station this week to voice their concerns at health risks from electromagnetic radiation.

They expressed their worries to Newsbytes about unknown dangers from a new type of device – small cell base stations – being installed in the Sydney eastern suburb of Kingsford by telecommunications company TPG to enhance mobile phone signals.

Residents are concerned at possible health risks – especially to children – from long term exposure to radio-frequency electromagnetic fields (RF-EMF). But the local council says it is powerless to stop the roll-out.

‘Why put it next to houses?’

Chris Frazis told Newsbytes TPG had informed residents the further away a person was from a small cell base station, the less of an impact radiation had on people’s health.

While telcos such as Telstra and Optus currently use larger, high-powered cell towers to broadcast their signals over long distances, small cell base stations are placed much closer together than traditional cell towers so that signals can be passed from one base station to the next to improve mobile phone signals.

Their small size allows small cell antennas to be placed on street lights, utility poles and the sides of buildings.

Mr Frazis contacted TPG to object to the base station installation. “The core of the email was: we are happy with our telecommunication services as they are. We don’t need what you’re providing. So why are you imposing it on us?”

Sylvia Profilio, who lives directly in front of the pole in Winburn Ave being used by TPG for the small cell base station, said she was surprised that work began without notice.

When workers first arrived on her street she questioned them about where they were from. 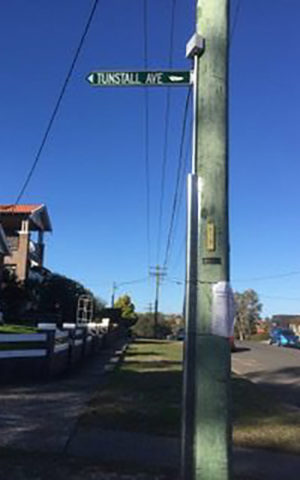 The small cell base station installed on the corner of Winburn Ave and Tunstall Ave, Kingsford

“They didn’t have any indication of where they were from,” Ms Profilio told Newsbytes. “When I said, ‘Do you mean you’re from Telstra?’ he said, ‘Oh something like Telstra’.”

Ms Profilio said digging for the base stations was completed before the letters from TPG were dropped in residents’ letterboxes.

Paul Sampson, who lives directly opposite the first small cell station installed in the street said he was concerned with both the installation process as well as the potential health impacts of long term exposure to RF-EMF.

“From my point of view this is our home. If I had a choice, I’d prefer it not to be there,” Mr Sampson said.

“I can live without my cellular signal being quite so strong”.

Concerned resident Peita-Maree Pyne told last month’s meeting of Randwick City Council that residents were sceptical of having the small cell base station in their street even though the Australian Radiation Protection and Nuclear Safety Agency (ARPANSA) said no health effects could be attributed to low RF-EMF exposure from mobile phone base station antennas.

She questioned the results of the research saying, “The reality is the funding of a lot of these different organisations (such as ARPANSA) is funded by the telcos.”

Mrs Pyne said many countries had begun to take a more precautionary approach to the base stations.

“Countries such as Switzerland, Italy, Poland, Russia, China, Belgium and many more are applying the precautionary principle to reduce the risk to the community – especially children,” she said.

Mrs Pyne said adverse health effects on the community, especially children, were being noticed in those countries at much lower levels of exposure than current international guidelines.

“The other concern is this is going on based on 4G capacity,” she said.

“When 5G comes out the radiations are going to increase even further and as TPG’s network continues to increase … they can’t control the amount of radiation that residents are going to get exposed to. It may not be what they’re saying it is at this point in time.”

Local councillor Philipa Veitch told Newsbytes councils were hamstrung in their ability to act on the matter. Cr Veitch has met concerned residents of Winburn Ave.

“People are rightfully concerned about the potential adverse health effects posed by RF EME by facilities installed close to their homes,” she said. 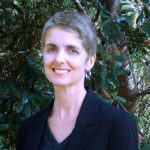 “Local councils have limited power under the relevant acts to stop new towers and small cell facilities from being rolled out, which is extremely frustrating.”

As base stations are being installed on exisiting infrastructure and have “low visual impact” they are considered exempt developments, not requiring a development application.

“In response to strong community concern, I am submitting a motion to the 2018 Local Government NSW annual conference, seeking representation for local councils on the ARPANSA EME reference group, so residents can have more input on emissions and the placement of these facilities,” she said.

In a statement to Newsbytes, a TPG spokesperson said: “TPG ensures there is sufficient consultation by following the processes set out in a mandatory industry code called the Mobile Phone Base Station Deployment Code. We make sure the community is notified by putting up notices at the proposed site and doing letter drops to nearby residents.

“Safety in this area is tightly regulated, and TPG has to, and do, operate within standards and limits set by government authorities. We make sure that we enhance service and connectivity for the community in a way that is safe and lawful.”