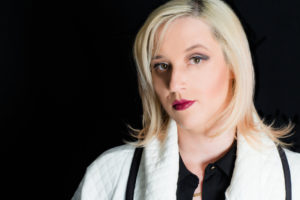 By day Lana Lyric is a security professional, training security officers around the globe with a file hosting service.

By night she is an artist in the music industry (as well as a performing artist, music producer and sound engineer) with her own company, working on her music as well as producing other artists’ work.

“I’ve always loved music, I even wrote my own song at the age of 12, but it wasn’t until I had a dream at 17 that made me pursue it professionally,” Lana says of what made her turn her passion into a career.

A self-starter, she has balanced her career in security with work in the music industry.

Scouting locations for filming music videos, writing songs for herself and others as well as marketing and promoting her music has seen Lana travel Australia and the world.

“I’ve travelled to LA, the UK, New Zealand and all over Sydney to record and (produce music),” Lana says of her travels.

“(I) have collaborated with artists and producers from all over the world – from Canada to the US, to New Zealand, to the Netherlands, to the UK, to Germany just to name a few.”

Lana has released three mixtapes as well as a range of one off singles. Much of her music is socially conscious, dealing with issues that have an impact on today’s society.

“She Don’t Need Nobody”, released in 2016, deals with the issue of young women’s body image.

“I wrote ‘She Don’t Need Nobody’ for women’s empowerment,” Lana says of the track. “Today’s society is so fixated on image and young girls and women are having self-image issues more than ever. It’s a song meant to encourage independence and empowerment.”

Lana says there are many great women that the younger generation can look up to when she raps, “Be leaders like Joan of Arc, stand your ground like Rosa Parks, aim sky high like Amelia Earhart.” Lana – ‘be leaders, stand your ground’

Most people who know Lana agree she has a look that captures people’s attention. Be it her hair which has at various times been short and colourful to now mid-length and blonde, to the tattoos that adorn her body, she has a presence on stage and on camera.

“I have a music cuff on my wrist. It’s sheet music wrapped around my wrist with the words ‘born lyrical’ on it,” Lana says of the tattoo on her wrist.

It’s the ink on her back however that draws the most attention – a large, double headed Russian eagle that represents her cultural heritage.

Lana now works on projects for her clients while Dropbox’s security training specialist – a role that requires her to work at all hours of the day and night to fit in with the international offices.

She is also working on two projects of her own, one an EP and the other an album to be released early next year.