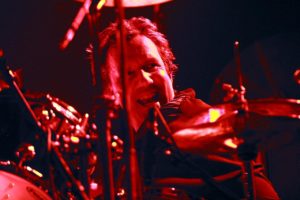 At 63, Dr Feelgood’s leader Kevin Morris still tries to thrash the drums as hard as he did when he joined the band in 1983. He seems reluctant to pass the torch to a generation either unwilling or unfit to wrest it from him.

“We carry on touring because we all love it,” he told me in his calmly precise English accent. “I think it’s a huge privilege to be paid to travel the world and play music.”

Speaking to Morris in London by phone before the band’s May Milk and Alcohol tour of Australia I was as surprised to hear him talking about the warm and pleasant London weather as to discern the relaxed manner of the leader of a band known for its direct and aggressive style.

Among Dr Feelgood’s oeuvre are the hits Roxette, Hey Mama Keep Your Big Mouth Shut, and She Does it Right. Yet the tall, carefully spoken Morris started his career as a 17-year-old with the soul band Sam and Dave.

His first tour was Sam and Dave, when he said he “learnt an awful lot”.

“I learnt about dynamics and also how to put a show together. Sam Moore was a fantastic singer and they were a great act. It was a baptism of fire.”

A student of music, Morris and the band have covered seminal blues artists Muddy Waters, John Lee Hooker and The Coasters as a balance to their naturally direct and aggressive sound.

“Our music is rooted in blues and many of the songs that we play that we haven’t written are old blues songs that we tend to play a bit faster. As you say it’s quite aggressive, but it’s really a rocky rhythm and blues,” Morris said.

Dr Feelgood’s current line-up has been remarkably stable – they’ve been together for 20 years, something Morris says “is an all-time record for us … – we’re all a bit older now so people aren’t quite so tetchy and hot-headed.”

Morris is solid, an emotional rock, so this stability is likely due as much to his influence as to their age.

Speaking of age, remaining relevant in an industry dominated by the churn of electronic hits does not faze Morris.

“We attract quite a mixed crowd. There are people who have followed the group forever and they’re very easy to spot because they have grey hair. But we still get the youngsters as well.” These have been “introduced to the group by an older brother or sister or even their parents”.

Asked if there is an obvious successor to Dr Feelgood, Morris was unconvinced there were any bands knocking down the door. But he did offer this: “It’s all about attitude. It’s about the attitude of going out there with a couple of amplifiers and a drum kit and giving it some stick.”

It sounds so simple, but that’s their way. My money is on them touring for many years to come – as long as Morris remains the driving force from the drum kit.