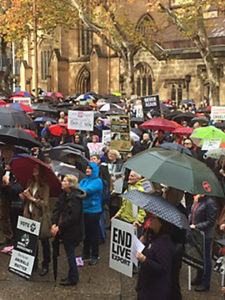 About 500 protestors gathered at Sydney Town Hall last week to call for a ban to the live export industry.

The rally was held by the Animal Justice Party NSW in response to government reactions to TV footage of sheep being transported from Australia to the Middle East suffering extreme heat stress.

Mark Pearson MLC of the Animal Justice Party told the crowd that, “the live export trade doesn’t deserve a social licence to exist” and that the trade couldn’t be saved, “either by government or industry.”

Mr Pearson said there had been a change in the public’s views on live exports which was having an effect on politicians.

“We are now at a point in the next two elections both in NSW and federally (that) the issue of animal protection and live export will be very much in the pot of all the issues they have to think about,” Mr Pearson said.

“Even if a member of parliament doesn’t care at all about animals, they’ll care about their seat. And we have to make the seat dependent upon what they are going to do about this disgusting brutal trade. They have to act.”

Media officer for People for the Ethical Treatment of Animals (PETA) Emma Hurst said politicians were trying to divert from the issue.

“Even now politicians like Turnbull are attempting to sweep it under the rug yet again,” she said.

“After every single high profile incident politicians have expressed concern and then taken no meaningful action at all.

“Some politicians hope that they can weather the news cycle and then it will be back to business as usual. We are hear today to say that that’s not good enough.”

She said the tide was turning on the conservative side of politics.

“From conservative politicians like Liberal MP Sussan Ley… to Derryn Hinch, people from all political persuasions are pushing for an end to this cruelty.”

Mr Pearson also took aim at Agriculture Minister David Littleproud: “If (he) does not get this industry stuck down… then we will have to have a campaign to export Minister Littleproud and keep animals here under our care.”

The uproar over the live export trade has been ongoing since 2011, with the industry banned by then Prime Minister Julia Gillard when footage emerged of the cruelty Australian cattle suffered in Indonesian abattoirs.

Asked for a response to the protest, Mr Littleproud’s office released a statement from the minister: “I adopted all 23 recommendations of the McCarthy review including giving sheep up to 39% more space.

“The live export industry supports 10,000 direct jobs and Labor’s 2011 ban was a disaster.

“Kuwait, Qatar and the UAE import more than 80% of their meat – most of it from Australia – and have openly said they’ll source live sheep from other countries if Australia stops exporting.”