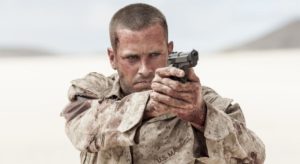 Mine is a military thriller written and directed by the two Fabios – Guaglione and Resinaro – and starring Armie Hammer in the lead role of US Marine Mike Stevens.

Sergeant Stevens and partner Tommy Madison wander into a desert mine field in a North African war zone after a mission unravels.

Without disclosing too much, Stevens is stranded in the desert for 52 hours, where he must face a constant onslaught of physical and physiological battles.

Hammer turns in a committed performance and draws the viewer in with a series of fatigue induced flashbacks while the action is relentless as he fights for survival.

The film builds suspense well and offers up numerous moments that had me squirming in my seat, wondering (God forbid) what I would do in a similar situation.

Some scenes are graphic, which is to be expected in a movie set in a war zone, but they were confronting nevertheless; the film definitely deserves its M15+ rating.

Mine does not set out to solve the issues which led the marines to the desert, but instead offers a one man view of his time in service and illustrates how quickly situations can change in a war zone.

The flashbacks sometimes seem tedious and a little too long, but only just, and they don’t detract from the overall viewing experience.

As a psychological thriller Mine is a success, and as an insight to marine life and the challenges armed forces face, the Fabios have ticked all the boxes.