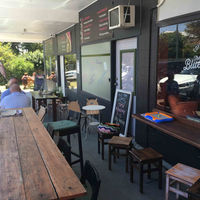 You won’t find it on any top 10 list for the best avo on toast in Brisbane, but The Blue Poppy has to be a serious contender for that title.

Maybe it’s being tucked away in the backstreets of suburban Morningside that stops this place getting the recognition it deserves.

Still, despite its hidden location, the Poppy attracts a steady flow of customers, which shows they’ve got to be doing something right.

The café was buzzing by the time I arrived for an early breakfast. The laid back and welcoming atmosphere attracting a variety of customers, young and old, from cyclists, business men as well as a couple of women I can only describe as high school art teacher-lookalikes.

After ordering the classic café-staple of avo on toast and a cappuccino, I opted to sit on the high top table inside, over the vintage armchairs opposite or the long wooden tables outside. Staff were casual yet attentive, and very friendly.

While many cafés around Brisbane offer extravagant and unique spins on the basic combo of avocado on toast, The Blue Poppy’s version has to be my all time favourite. Sourdough toast generously topped in smashed avo and Danish feta, sprinkled with pistachio nuts, served with chili jam on the side and a wedge of lemon – delicious!

Not to mention some of the best coffee you’ll find in Brisbane. It truly doesn’t get much better than The Blue Poppy.