The Nobel-winning scientist who made himself sick 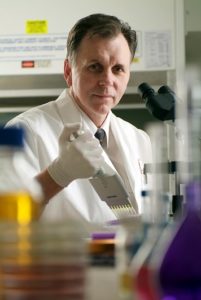 Professor Barry Marshall: “You’re joking,” said his wife when he told her what he’d done.

A scientist makes a discovery challenging the medical establishment, his research isn’t taken seriously by his peers and in desperation to prove he’s right he experiments on himself. Sounds like the plot from a campy sci fi movie, doesn’t it?

Kalgoorlie born, Professor Marshall is part of an elite group, one of only 15 Australians to win a prestigious Nobel Prize.

Professor Marshall and long-time collaborator Dr Robin Warren showed that the bacterium Helicobacter pylori is the cause of most peptic ulcers, reversing decades of medical doctrine that ulcers were caused by stress, spicy foods, and too much acid.

“We know how to manage and cure at least 95 pencent of cases so I don’t know of any people with ulcers having trouble with helicobacter,” Professor Marshall said.

Professor Marshall and Dr Warren were announced as Nobel Prize winners in 2005 for their discovery of the bacterium Helicobacter pylori and its role in causing inflammation in gastritis and peptic ulcer disease.

As for Professor Marshall’s famous self-experimentation – he drank a petri dish of cultured Helicobacter pylori in 1984 after failed attempts to infect piglets.

“So, there was a lot riding on it and I had really not been going anywhere with it for 6 months with all these things I was trying to do to get the theory accepted. I had few friends. It was an important experiment”.

Before Professor Marshall drank the bacteria he had a baseline endoscopy.

After eight days he had another endoscopy that showed he had massive inflammation of the stomach lining and a biopsy was taken.

Helicobacter pylori was cultured from the biopsy showing it had colonised his stomach.

“I got the biopsy and I could say well look even if nobody believes a word of this syndrome, they’ll say it’s all psychosomatic, the biopsy is proof that the bacteria living there cause inflammation. I was pretty excited about it. Finally, I’d knocked down a major barrier about this theory.”

His wife Adrienne wasn’t so excited when Professor Marshall told her the news while she was cooking dinner for their four children.

“Her initial reaction was disbelief. You didn’t really? You’re just joking, aren’t you? And I said no, no I drank the bacteria and I got gastritis and it’s infecting me right now…

“And then you can see all the visions in her mind of me dying of an ulcer and then no income and all these little children sitting on the pavement with mugs trying to get money from passers-by”.

His daring self-experimentation got the attention of microbiologist Mike Manhart who worked for multinational health and beauty company Procter and Gamble.

Procter and Gamble funded a fellowship for Professor Marshall to travel to the USA to further his research into Helicobacter pylori.

Procter and Gamble arranged support funding to set up a lab at the University of Virginia where Professor Marshall spent 10 years researching the treatment and diagnosis of the bacteria.

While there Professor Marshall developed reliable and cheap tests, the CLOtest and PYtest, to identify Helicobacter pylori infection.

He returned to Perth in 1996 and was awarded the McFarlane Burnet fellowship to continue his research at the University of Western Australia.

What was Professor Marshall doing when he found out he’d won the Nobel Prize in 2005?

He was eating fish and chips with Dr Warren at the Swan Brewery in Perth.

“… that’s what we were doing when they called him on his mobile phone in 2005 and said you’ve won the Nobel prize Dr Warren”.

“He and I had a great time at the Nobel Prizes so that’s a big memory for us”.

“Every two to three months we’ll have something going on together. Sometimes minor disasters but usually good. We always try to get together and have fish and chips or something at the Brewery on Nobel Prize announcement day”.

Professor Marshall said his life has changed because he sees the value of the Nobel Prize and the way it amplifies interest in science.

“The narrative that we get in Western Australia is just because you’re miles from every other capital city you don’t have to be too paranoid about it. There is some advantage to being in your own microcosm … which allows you to be original and experiment with new ideas”.

Professor Marshall said sometimes a discovery in a funny little area grows exponentially into something that’s very important that we’re all using.

“We were like that; gee how could bacteria live in the stomach with all that acid? You know that’s pretty esoteric”.