Like a cheesy sitcom film set – and wonderful fun 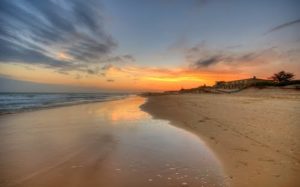 As someone who thoroughly enjoys being indoors, curled up under a blanket, watching trashy TV or a good crime documentary, I wasn’t overly excited when my fiancé presented me with the idea of a camping trip.

“It’ll be freezing!” I gasped, with what I’m sure was a horrified look on my face. Winter not being far behind us, I was vividly imagining myself sitting on a rickety camp chair, shivering with tiny icicles forming on my eyebrows.

Alas, I agreed to the impending doom of three nights huddled up on an air mattress in a borrowed tent. We were to be heading 242 kilometres east of Melbourne to Seaspray, Victoria.

As we set off on the four hour drive, we sang terrible renditions of our favourite songs and watched as the dark grey clouds became heavy and the rain began to pour. However, upon arriving at the Seaspray Caravan Park on the amazing 90 Mile Beach, the sun began to shine.

Before meeting up with our friends at our allocated campsite, we were welcomed warmly by Kim, one of the park owners. She gave us directions to the site and wished us a fabulous stay.

As we drove through the boom gates, it was as if we were entering the film set of a cheesy sitcom – children riding their bikes with big sm-+ on their faces, dogs with equally big smiles lapping up the fresh air and families sitting around playing board games or “backyard” cricket.

After setting up our tent, we settled down around a fire to relax in the crisp, fresh air. As the sun went down, it was cold. I was picturing my earlier visions coming true, as I shuffled in closer to the fire. We ate fish and chips from the local shop – delicious, albeit overpriced – and drank beers as we settled in for the night.

The moon was spectacular – huge and bright! We decided to go for a walk to the beach for a closer look and to perhaps take a masterful photo. The sound of the waves crashing, and the fresh, cold air on my face made me instantly thankful that I had decided to come on this trip.

Seaspray is a stunning little coastal town, with a small population but a huge amount to offer. With its main attractions being fishing, surfing and other water sports, there are also plenty of lovely picnic areas and of course the 90 Mile Beach itself.

We walked along the beach daily and enjoyed falling asleep to the sound of crashing waves each night. The safe, family atmosphere at the park was in itself as comforting and special as Seaspray proved to be.

Memories were made, fresh air and sunshine were absorbed, and plans to go back again are already in the works.