Music has charms to soothe a troubled heart 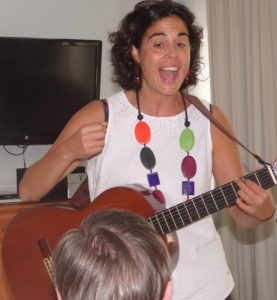 Their eyes lit up and they started singing.

No longer were they confused old folks. They were remembering a time when they were young. Leading them in song was a vibrant woman who sang and strummed guitar.

And no singer could have a better audience – they were fully engaged with her facial expressions, singing and movement.

In fact their entertainer was music therapist Tania Balil at the Blue Care dementia unit.

The transformation in the patients was quite beautiful and mesmerising. It touched the heart to see it.

This therapy is making a positive and joyful impact on people who truly deserve to still enjoy a quality of life filled with music, laughter, memories and connection.

In the depths of terminal illness, degenerative disease or unimaginable, excruciating pain and trauma, health professionals face a challenge. It is to offer comfort, reassurance, joy and hope where the promise of reward, ease and thanks are ever elusive.

Music therapy is an area making a big difference in many lives. Trauma and boredom create societal problems and Jasmin Roberts, chair of the Queensland branch of the Music Therapy Association, uses music to help assess people in a non-clinical sphere.

Rhythm is part of people’s lives and when that rhythm is affected, it is more stressful, she explained.

She lives and works in Normanton in north-west Queensland as support worker in an indigenous community, including working with teenage girls. By focusing on building communication and explaining what happens when rhythm changes the young women could understand how their bodies felt.

“Everything is rhythmical, natural rhythms, tides, seasons, rains, animals, noises in the environment (birds), [it’s] connecting them back to culture [and country],” she said.

The feedback from the girls was positive and she said they really liked it and enjoyed the drumming as it was a technique they could relate to.

She explained that the applications and opportunities for music therapy are wide and varied.

It is often used to complement other therapies and medical treatments with other allied health professionals and the qualitative value of this intervention is immeasurable, yet vital and life-changing.

From aged care to neo-natal intensive care units (NICU) to burns units, abuse, trauma and disability services, its use is making a difference in many lives daily.

Ms Roberts is also a strong advocate for inclusion of the therapy in the Medicare Benefits Schedule.

So far it doesn’t make the cut. Or as a Health Department representative said: “New services proposed for the MBS must be supported by the Medical Services Advisory Committee, an independent expert committee responsible for advising the government on services’ safety, clinical effectiveness and value based on consideration of the available evidence. The schedule does not currently list music or art therapy.”

This means the Medicare rebate does not apply and clients and patients must pay for themselves or access a publicly funded hospital, facility, organisation, school or community program.

Ms Roberts said it was critical for the association to ensure rigorous registration procedures were in place for qualified music therapists. Music therapy has been proven to be very helpful with autistic clients, as shown by Dr Alan Turry of of the Nordoff-Robbins Centre at New York University.

Music therapy has been proven to be very helpful with autistic clients, as shown by Dr Alan Turry of New York University. While Music Therapy has been referred to as a means of medical treatment since the 1800s, it really gained momentum in the 1900s when it was used for veterans of war suffering emotionally and physically from the stresses, trauma and horrors of war.

Ms Roberts said the Nordoff-Robbins approach is the other birthplace of music therapy and they were the pioneers of a style known as creative music therapy.

They used their work on children with severe disabilities in the 1960s and 1970s.

She said music therapy is beneficial for children and discussed the paediatric ward and patients with severe burns and when the child has to have their dressings changed.

“The music therapist attends [as it is] extremely painful in the water. [The RMT] is there with the child supporting, [easing] emotional distress and [helping] breathe, rather than scream. Music affects your brain with the rhythm and melody.

“[The RMT] uses music in a very real way alongside a child emerged in the bath having their dressings changed. It is a traumatic and graphic experience,” Ms Roberts said.

Ms Roberts said diseases such as Alzheimer’s, Dementia, Parkinson’s Disease, Acquired Brain Injury, Stroke and Autism were examples where music therapy helps re-access that side of the brain that no longer functions properly.

“Music actually helps reactivate and rewire the damaged part of the brain… you can get new connections happening, neuroplasticity.”

Brisbane music therapist Tania Balil said as soon as she begins to play guitar and sing at an aged care facility, there is a significant change in the patients with degenerative brain illnesses.

“Something turns on in them and they all sit down… It seems to rewire the brain and give them a renewed sense of self and memory. They become relaxed and… stay, interact, smile and talk.”

Ms Balil has also noticed the healing effects of music therapy in aged care patients and how it ultimately becomes a joyful experience for them.

“You cannot underestimate the joy it brings to their lives,” she said.

She said that witnessing this joy and enrichment is a rewarding aspect of music therapy.

She has also noticed that while music therapy is not a cure, those exposed to the treatment seem more alert and switched on and the degeneration in the brain seems to slow down.

Music therapy has also been effective in helping victims of sexual and physical abuse, severe trauma such as discovering a parent who has committed suicide and trauma caused by war, conflict, witnessing family members being killed and hazardous journeys to seek safety and sanctuary.

Ms Balil gave a heart-warming example of a remarkable transition in a female refugee from Somalia.

The teenager was very shy and would not tolerate being put in the spotlight, especially coming from a background where women have no say and no voice.

The therapy was used with a group of students as a means of expressing how they were feeling and what they wanted to say, “be it the future, dreams, griefs, what they are grappling with.”

The idea was that they would write songs and then perform them at the school.

After the group had performed five times, Ms Balil asked the girl what she had found most rewarding about the music therapy programme.

The girl said she went from wanting to hide and thinking she would die to gradually feeling less nervous and more confident each day, to even finding the performance exciting and exhilarating.

On the final day she had the confidence and self-esteem to stand up in front of the whole school and tell her story.

“The collective group helped her summon the courage to speak. She was able to channel that support to move beyond her fears. This remarkable journey was a compelling story,” Ms Balil said.

“Giving people a voice is totally reassuring. Seeing that vulnerability and rising out of it and showing strength is priceless.”

That improvement in the self-confidence, emotional strength and nature of the person is where the real value, benefit and reward of music therapy lies.

It is making life-changing and positive, qualitative differences in the lives of participants, patients and clients daily.

In a sign that the industry might be gaining greater recognition for the important role it plays in making a positive change in people’s lives, Nordoff Robbins announced in March last year that Music Therapy has been approved by the NDIS agency as an eligible therapeutic support to be incorporated in life changing programmes. (The federal Department of Health said the role of music therapy in the NDIS was a matter for the National Disability Insurance Agency.)

The beauty and value of music therapy is that it is a very careful, assessed and supervised treatment that will never make someone more sick and simply provides rhythm and solace to aching minds and bodies.

It gives patients and clients a period of calm, peace and a deep joy that touches the heart and elevates the soul with rhythm that we can all relate to and where they can experience life on a higher frequency.