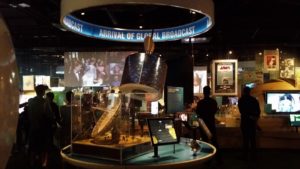 If you’re itching for something out of this world what could compete with travelling back in time with the Australian Centre for the Moving Image?

As a nerd with a love, some may say obsession, with the moving image and all its offspring I was awed by the immersive exhibit. My favourite section (the one that involved time travel!) was Emergence.

This section explored more than 100 years of moving image history including interactive displays and rare footage from early silent films such as ‘The Story of the Kelly Gang’, a 1906 silent film shot in Melbourne that traces the exploits of the infamous bushranger. It really feels like you’re stepping back in time to view the short silent films on the carefully reconstructed Kinetoscopes from the early 1900s or when you witness the inauguration of the Commonwealth with the swearing in of Australia’s first federal cabinet at Centennial Park, Sydney on 1 January 1901.

Another highlight of the exhibit is the section Sensations where you can have fun with the 3D Zoetrope – the most detailed optical illusion in Screen Worlds – or play with the shadow monsters screen. My favourite and the most popular activity in Sensations was the Time Slice room. Based on the Bullet sequence from sci-fi classic The Matrix, the Time Slice allows you to create videos where you float and freeze in mid-air just like the characters in the movie.

The only negative is really a compliment to the exhibition’s success. It is drawing the crowds – so you have to patiently wait for people to move so you can get closer to displays. As the exhibit is open daily from 10am to 5pm I’d recommend avoiding ACMI on school holidays or weekends so you can skip the crowds of tourists and children drawn to the popular or interactive displays in Screen Worlds.