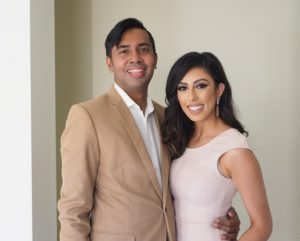 Making intelligence cool again is the aim of a company that brings internationally renowned intellectuals to Australia.

Mr Amila was inspired to create Think Inc in 2013 after going to an intellectual conference where “it caught my eye that the people that were there were basically a white older demographic”.

“From there a concept was drafted to create Think Inc where our mission is to popularise or rather remind everyone how cool it is to be intelligent and really talk about things that matter to us in our day to day life.”

Ms Jamil said Think Inc’s events were not university-style lectures or conferences but “edutainment” where people were entertained and educated simultaneously.

“You’ve got a Sri Lankan and an Arab Australian running an intellectually based company you know that’s trying to attract young people… Our target demographic is 16-35-year old’s,” Ms Jamil said.

Ms Jamil said they were proud that the audience for their events were 60 percent within that age group, multicultural and had an almost equal gender split.

“It’s really based around the way we present these people to the market. We market them as rock stars, superheroes because that’s what they are. And that’s how we present them,” Ms Jamil said.

“With the event with Maajid Nawaz there was a huge challenge in regards to security, we had one threat online, threatening to come storm the event which was quite scary and so it was reported to the Australian Federal Police, terrorism squads and all the local police around every space where we ran the event,” Ms Jamil said.

With the Maajid Nawaz event Ms Jamil said there was cultural pushback from far left groups, far right groups and some Islamic groups who didn’t agree with his progressive views on Islam and the role of Islam in terrorism.

Mr Amila said it was challenging to arrange the Edward Snowden event which involved a live video link with the whistleblower who is in hiding.

Corporate boycotts dogged the tour with Visa withdrawing its partnership, venues pulling out at the last minute and money transfer organisations refusing to send money to Snowden.

Mr Amila said he challenged the bank’s reasoning for refusing the transfer by asking them if they were suggesting that Edward Snowden was in the same league as a drug dealer or a criminal mastermind.

“We’re learning as we go and these are some of the things we have to deal with. It was a successful event, we really inspired a lot of people and got thousands of people attending to hear Edward Snowden and that’s what we will continue to do.”

Ms Jamil said the criteria for who they select to tour are all people who have big ideas, have answers to big questions or have certain ideas that make us think outside the box.

“We’re also quite strict on the people we know we’re not going to tour,” Ms Jamil said.

Mr Amila said Think Inc would not give a platform to ideas that are generally a threat to human progress.

“The enemy of reason will not have a platform,” he said.

Mr Amila said Think Inc’s 2017 tours would include some controversial figures that will continue to bring worthwhile ideas to make sure the conversation is heading in the right direction.