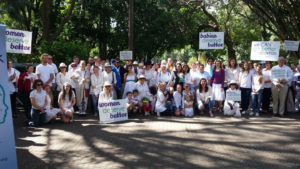 Opponents of the bill to remove abortion from the Queensland criminal code protested outside Parliament.

State and federal politicians joined a protest of about 300 people outside Queensland parliament on Tuesday organised by pro-life Rethink Abortion campaigners.

The protestors demonstrated with speeches, song and dance against the “Women’s right to choose” bill introduced by Independent MP Rob Pyne.

Opposition MP Mark Robinson told the rally he would oppose the bill and encouraged men to stand by their women when an unexpected pregnancy occurs and to support them.

“It’s a terrible piece of legislation and it should never have been allowed in parliament to be looked at,” he said.

“It does nothing to protect the rights of the unborn human life, and it will do nothing for women who are being coerced into abortions in domestic violence situations.”

Former Speaker Fiona Simpson told Newsbytes: “I think we need to give a voice to those that have no voice, to the unborn child, but also there’s a lot of women who can suffer not knowing that there are other choices.”

Katter Party MP Shane Knuth said he and colleague Rob Katter were “proud to be here … because we feel the children and babies need rights and need an opportunity to live”.

He said it was good to see the acknowledgement of mental health issues with women who have had abortions and the long term impact on them, their families and friends.

LNP Queensland senator Barry O’Sullivan, who attended the rally with former senator Ron Boswell, said to Newsbytes: “My call to the politician who brought this bill and the politicians who are going to support this bill: they need to think a lot longer and harder about progressive things that we can do to give these women a choice.”

“A lot of people don’t even realise the extreme nature of this bill,” she said.

Rethink Abortion is a grassroots campaign supported by organisations including Cherish Life, Priceless Inc., the Family Association, National Civic Council and the Australian Christian Lobby as well as individuals.

One speaker, Emma McLindon, told of her multiple abortions, the emptiness she experienced and how alcohol, sex and drugs existed in her life “to still the pain in my heart”.

“My first abortion was when I was a 16-year-old high school girl – I remember very clearly coming out of that clinic as a ‘completely different person’ – and I felt I had taken myself into a bubble that I could not get out of,” she said.

“No one ever said ‘have you considered adoption’, no one ever said ‘you’ll meet someone’ I just kept on thinking I’d be single forever, and that could have never been further from the truth.”

Mrs McLindon said women should realise they’re not alone and encouraged them to seek independent counselling as abortion clinics didn’t care and were “only there to provide a service”.

Cherish Life Queensland representative Julie Borger said: “This is not what the people of Queensland want, 84 percent know this is harmful to women.”

Catherine Smibert’s chorus: “Listening to all voices, exploring all choices” echoed as the rally was wrapping up.