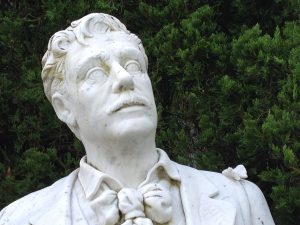 Detail from statue of Puccini in Nagasaki
(Photo by John Henningham)

Directed by Michael Grandage, the performance of Puccini’s sorrowful and tragic tale of a broken heart, breached trust and loss was a successful and splendid achievement.

The lyricism of the opera is moving and touching and highlights why it is still so popular.

The set was simple yet effective with the lighting used to great effect when night became day and characters moved from inside to the outdoors.

The rotating stage was an interesting touch at a critical time in the play where Butterfly waits all night for Pinkerton.

Such features draw the audience into the moment and create the real feeling of waiting, longing and hoping.

There was no amplification on stage which highlighted the power and strength of the performer’s voices.

The cast performed their roles masterfully, bringing the characters to life and transporting the audience into the moment.

Hyeseoung Kwon was beautiful in the role of Cio-Cio-San (Butterfly), with barely a dry eye in the house by the end of the opera.

Her faithful maid, Suzuki, was sung by Hayley Sugars in another outstanding and tender performance.

Bradley Daley sang the part of Pinkerton perfectly and though it is difficult to feel empathy or compassion for the character, the powerful performance from this highly talented tenor was convincing, compelling and striking.

Jonathan Summers performance was memorable and moving in the role of Sharpless, the American Consul, who tried to spare Butterfly the pain, emptiness and sadness of Pinkerton’s betrayal.

The accompaniment of the Queensland Symphony Orchestra conducted by Johannes Fritzsch complemented the cast well with its atmospheric and haunting sounds creating a mood of light and darkness during the performance.

An unforgettable moment was when Butterfly waits for Pinkerton and, as the night went on, the music created a sense of dread and despair for her fragile heart and soul, overflowing with devotion, trust and the anticipation, joy and excitement of young love.

A stand-out moment was in Act 1 when Butterfly was renounced by the family and relatives for abandoning her faith.

The operatic voices struck at the core and really left a pained feeling deep inside.

The magic and wonder of opera is its ability to stir such emotions in the heart and soul that stay with the audience long after the final curtain.

One Response to “Review: Madame Butterfly”