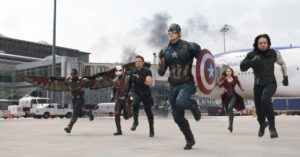 Superheroes to the rescue

With change in the air what will the Superheroes do? Will they bow to the pressure that is placed before them, or will they become a rogue force?

Marvel Cinematic Universe has pumped out yet another Superhero movie.

There are new Marvel characters introduced into the Avengers. They are: Tom Holland who plays a very young Peter Parker a.k.a. Spiderman and Paul Rudd as Ant man; and Chadwick Boseman as Black Panther.

Sadly, missing from the movie was the Hulk and Thor. That is understandable considering that the story line could have been cut short with the power available to these two superheroes.

Typical of a Marvel story there is a villain, but this one is with a twist.

Was it only one bad guy? Has Captain America’s old friend the Winter Soldier been turned again by Hydra?

It’s non-stop action with laughter and tears. Then there are those scenes that make you jump out of your seat.

The directors, the Russo Brothers, have done an outstanding job with the large cast in this movie with its complex storyline.

They take you to a new level of identifying with the Avengers enabling you to see them in a new light.

Verdict: If you love Marvel movies then you won’t be disappointed with this one. Out of 10 I’d give this movie an 11.

It’s one of the best Marvel movies to hit the screens.

But if you’re new to the Marvel story lines you may find Captain America: Civil War a bit confusing as it fills in gaps from other Marvel movies.

I’d recommend you start with the very first Captain America to see where it all begins.