Challenging times ahead for Gladstone as roller-coaster ride continues 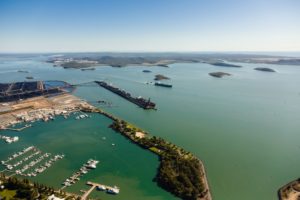 Industry is the Gladstone Region’s life blood and has been considered for decades as the centre of Queensland’s sporadic industrial prosperity.

But the intermittent cycle of industrial projects in Gladstone creates instability within the region’s economy and often leaves local businesses struggling to survive.

The Gladstone Chamber of Commerce and Industry (GCCI) recently released their ‘Boom, Bust or Reset’ study that provides detail on the effect of the LNG Plant construction on local businesses.

The study undertook a randomised survey that saw the response of 253 businesses across a range of sectors.

As many as 9 percent said they would close down in the next 12 months, while 43 percent predicted they would be in a worse financial position in 12 months.

GCCI president and Gladstone Regional Councillor Rick Hansen understands that these are grim times for local businesses, but hopefully they will be short-lived.

‘While local businesses are doing it tough right now, we are optimistic that things will turn around and Gladstone will be economically prosperous in the future,’ Mr Hansen said.

Director of local consulting business Amarna, Crystal McGregor, says that it now has to be up to businesses to do what they can to stay afloat.

‘Gladstone is in bust mode, however each business must not only react to change and act in a positive manner but they must also diversify, follow the money and where possible reinvest in growth strategies,’ Ms McGregor said.

The port of Gladstone, the fifth largest coal exporting terminal in the world, holds 30 percent of Queensland exports and 10 per cent of Australia’s exports.

The most recent ‘boom’ in Gladstone’s industrial playground was the enormous $70 billion investment in coal-seam and liquefied natural gases.

The investment in the three LNG (liquefied natural gas) plants on Curtis Island have created more than 10,000 jobs with one plant alone generating $6.2 billion worth of work in Queensland from 2011 to 2013.

The latest resurgence of industrial construction in Gladstone began in 2011 which saw a 0.7 percent drop in unemployment rates to 4.6 percent, compared with 5.6percent in the rest of Queensland.

In 2012 the unemployment rate dropped dramatically to 3.8 percent in Gladstone, while the rest of Queensland struggled at 6 percent.

But what goes up must come down and Gladstone residents are certainly feeling the harsh sting of the end of the ‘boom’ period.

The LNG plants on Curtis Island have moved into an operational phase which has seen a dramatic loss of jobs and considerable slow economic downturn.

The unemployment rate in 2015 climbed all the way back up to 6.3 percent in Gladstone, compared to Queensland’s 5.9 percent.

The rate of population growth has also slowed by 1.8 percent since 2014.

The project on Curtis Island went through the quickest construction phase of any LNG project of its size in the world, leaving Gladstone businesses unarmed and unprepared to cope with the drastic change in the local market.

The Euroa Steel Plant is the next construction project set to hit Gladstone in the coming years and should generate 2000 construction jobs, with another 720 jobs on offer during its operating phase.

While the project looks promising for Gladstone, it may be yet another project to send the region into a short lived ‘boom’ period, only to come crashing right back down.