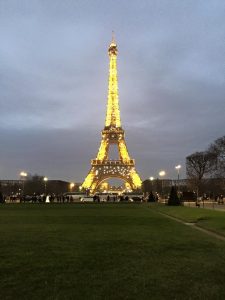 The Eiffel Tower in a blaze of light

One would think that after seven hours in the company of 50 sniffling noses, sore throats and tired heads there would not be much excitement in the air.

However, even viewed through a bus window, Paris is magical.

We had been travelling around Europe for 20 days together, hitting cities for two days at a time and jamming in everything that we could.

From the marvellous gothic skyline of Prague to the eternal city of Rome, we had seen a lot in a short amount of time and it was taking its toll.

The last stop on our Contiki tour was Paris.

If it wasn’t for the enchanting feeling you get as soon as you enter the city, we all might have spent the day sleeping.

We began our day in Paris risking our lives running across the infamous Arc de Triomphe roundabout.

Fortunately, we all made it unscathed and then walked the 284 stairs to the top of the Arc de Triomphe to get the best views of the city.

We made our way down the Champs-Elysees to discover the only shop we could afford to buy food was a McDonalds.

Even the ‘Maccas’ in Paris is special as it is not the only the biggest in the world but it’s also the only one in the world with a white ‘M’ symbol.

We walked to the stunning Eiffel Tower where we climbed more than 1000 stairs to the top – then devoured a delicious Nutella and banana crepe from a stand at the bottom.

More than tired we kept walking the inviting streets.

There is something in the air in Paris that makes you instantly fall in love with the city.

Definitely save your money and forget trains, buses and taxis and opt to walk around instead.

Despite being completely run down, there was not a time when I thought: ‘I just want to go home and lie down’.