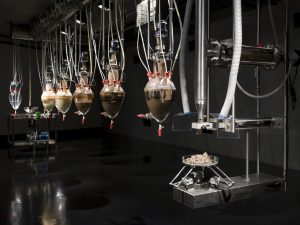 Hidden deep in the bowels of the Museum of Old and New Art (MONA) in Hobart is the Cloaca, known as the Poop Machine to fans and critics alike.

It was designed and built by Belgium man Wim Delvoye who wanted to recreate the human digestive system as close as scientifically possible.

The monstrous machine has a whole room and, understandably, a guide dedicated to its daily functions.

As soon as you walk around the corner, you are hit with the pungent smell of a public toilet, and your eyes trace the path of the pipes, glass receptacles and mysterious brown substances.

The idea behind the installation is so out of this world that your mind does not jump straight to the right conclusion, and but instead reaches out to the people standing around, looking for answers.

All around you hear the whispers of several groups pondering the same question: “What in God’s name is that?”

The guide clears his throat and recites the same speech he has said a thousand times before.

“This is Cloaca. We feed it twice a day and it poops at 2pm on the dot.”

Now I know what you are thinking: “How on Earth is this considered art?” which is precisely what I think.

Surely this is more science than art. Or even 99 percent science, one per cent art.

However, the beauty of this piece is that it does exactly what it’s meant to do.

It gets people talking, and it stays in your mind for far longer than a painting or a sculpture.

It pushes the boundaries of modern art into a realm in which we will probably never recover.

Hats off to you, Wim Delvoye for keeping me up at night pondering the meaning of art.