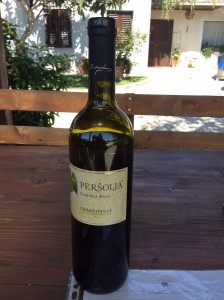 A local chardonnay at Goriska Brda is a post-hike reward

No hardship can crush the hopes of two million people.

The red-haired university lecturer stood and watched passers-by stroll through the the main square of Slovenia in southern central Europe.

Despite a struggling economy and a ballooning refugee crisis, Helena is optimistic about the future.

For her tour guide partner Tina on this stroll through communist Ljubljana, economic problems were run of the mill.

Under communist rule, her family had lived a threadbare existence, particularly in winter when the mountains were blanketed by snow.

Still, Tina considers herself lucky – she’d grown up close enough to Italy to get smuggled goods. In 1985, at 14, she even tasted a banana.

“It was divided between my sisters, but it felt amazingly indulgent,” she said.

For an ice cream seller like Tomas Jansa, indulgence is a source of income.

His stall on the corner of Congress Square dishes out “the best” ice cream in Slovenia.

“This summer has been much better than the last ones, what with the crisis and everything,” he confided.

“Things are starting to pick up again. Yes, things are definitely turning around.”

In Goriska Brda, a hilly wine region in Slovenia’s west, the outlook is similar.

“Owning a winery is hard work,” resident Nika Bozic said. “It’s getting harder to know what the weather will do, when the seasons will change.

“All you can do is work to your best potential and know good fortune is just around the corner.”

Back in Ljubljana, the communist tour ends at an empty public square originally slated as a place for rallies.

“We are glad of our communist past,” Helena said earnestly. “Not many countries have free healthcare, free education, a willingness to share.

“Our communist roots have made us focus on things beyond money, so in a way strange way, we ended up getting the best of both worlds.”