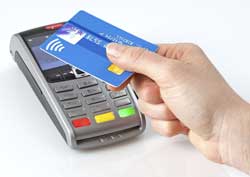 A Brisbane magistrate has criticised tap-and-go technology after a man went on a shopping spree when he found a debit card outside a supermarket.

The court was told Colin Leslie Saunders used the no-PIN pay-pass facility to obtain goods illegally after finding the card at a Newmarket shopping centre.

Wendy Cull, SM, said the pay-wave system was too easy to misuse.

Saunders, 56, unemployed of Wooloowin, pleaded guilty to charges of theft and fraud after using the card to make 22 purchases. A woman had dropped the card outside a supermarket.

Prosecutor Sergeant Tara Pease said Saunders found the lost card on 28 May. Instead of handing it in he used it at liquor stores, supermarkets, fast-food outlets and service stations.

He was able to avoid detection by staying under the $100 limit for each transaction, Sgt Pease said.

Saunders accumulated a total of $646.40 worth of goods on the card.

Sergeant Pease said Saunders was discovered when he went online and tried to buy goods up to the value of $700. He was arrested on 20 June after the online purchase attempt failed.

Solicitor Silas Cocks said his client had been suffering financial hardship due to a foot injury that stopped him working.

He also said Saunders had a history of alcohol abuse.

Mr Cocks told the court Saunders had no previous convictions and that his actions were opportunistic.

In response, Magistrate Cull said picking up the card and using it once would have been opportunistic – but using it 21 more times was blatant and deliberate.

Saunders was ordered to pay restitution and complete 40 hours of community service over an extended period of 12 months because of his injury.