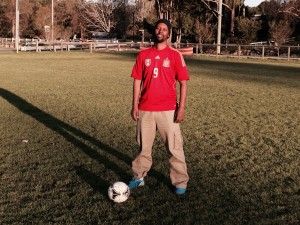 From civil war in Somalia to the lazy Central Coast suburb of Wyoming, Somali-born Khalid Ugaas’s life has been dramatically split between two continents, cultures and lifestyles.

The softly-spoken 30-year-old business student has come through harsh circumstances to find peace in Australia. Finally, the skies look bright.

Khalid, one of 11 children to Ogaden-born parents, lost four siblings to malnutrition early in life.

His family spent seven years in a UN refugee camp in Kenya after fleeing the civil war. They finally came to Australia on a humanitarian visa. It had been arranged by Khalid’s brother, who was living in Australia.

The application was far from smooth – it took five years for the visa to be cleared in 1998, including a re-application after the visa was initially denied, and another three before the family could make the trip to Australia.

Khalid has had both good and bad experiences.

When they arrived, Khalid’s family were made to feel at home.

“We had volunteer people who helped us settle here in Australia,” he said. “They found us a house, furniture and all that kind of stuff.”

But despite the family’s best efforts to integrate into Australian culture, Khalid recalled one incident of racism by a woman toward his younger sister who was wearing a hijab.

“They had some sort of fight, apparently, and then police came in to kind of intercept the situation. And there’s some little, you know, incidents like road rage.”

Khalid loves his adopted home, despite the difficulties he’s faced, and is positive about the future. There’s a twinkle in his eye when he talks about what’s ahead for him.

“So that’s why I said life could not have been better right now. I cannot wait these dreams to be realised.”